Philippine soldiers on Monday (July 5) continued to search for the black box and data recorder of a C-130 Hercules transport plane which crashed on July 4 in the country’s worst military air disaster since World War II.

The crash has so far killed 49 soldiers who were on board the plane and three civilians on the ground, while 47 were injured. The plane was carrying 96 people, including two pilots and four other airmen. Three of the six airmen survived but are in serious condition, according to military chief General Cirilito Sobejana.

Major General Romeo Brawner, who on Monday took over the 4th Infantry “Diamond” Division from which many of the fatalities came, said he and his family “rode the same C-130 airplane that crashed” earlier that day.

Brawner told his changeover command ceremony that the 6am flight from Metro Manila’s Villamor Air Base to Lumbia Airport in Cagayan de Oro City was uneventful and nothing seemed amiss.

“It was really shocking news for us yesterday, after disembarking at Lumbia Airport, after a few hours we heard the news that the same aircraft crashed in Jolo and with it perished the lives of 47 of our comrades,” said Brawner, who once commanded the military forces that wrested the city of Marawi from the control of Islamic militants.

Defence Secretary Delfin Lorenzana said he has ordered “a full investigation to get to the bottom of the C-130 incident, as soon as the rescue and recovery operation is completed”.

Military spokesman Major General Edgard Arevalo told a media briefing on Monday that there was no indication the plane had been attacked as it was landing on Jolo island, which is home to the Muslim extremist group Abu Sayyaf, some of whose members have been known to fire rocket grenade launchers at aircraft.

“This is one of the worst tragic incidents that happened in our armed forces,” he said, describing the heavy duty cargo and transport plane as “not brand new” but in “very good condition”.

“And when the accident happened, it still had around 11,000 flying hours remaining before the next maintenance of this aircraft,” Arevalo added.

The four-engine turboprop plane was one of two former US Air Force C-130 aircraft manufactured by Lockheed that were handed over to the Philippines in February as part of a military assistance programme.

The state-owned Philippine News Agency said the two planes cost 2.5 billion pesos (S$68 million) in total, of which Manila paid 1.6 billion pesos and the US government the remainder. Only one plane has been turned over so far.

The plane was described by the Philippine News Agency as “capable of using unprepared runways for take-offs and landings”. The US Air Force also describes it as “capable of operating from rough, dirt strips”.

The investigation would look into why the plane apparently overshot the Jolo runway. Armed forces chief General Cirilito Sobejana said soon after the crash that “one of our C-130s, while transporting our troops from Cagayan De Oro, missed the runway, [and was] trying to regain power, and it failed to, then crashed”.

Military historian Jose Antonio Custodio, who once worked for the Armed Forces planning section, told This Week in Asia that the Jolo runway was “unforgiving” if a pilot has a problem like “a landing gear that did not deploy”, as is being speculated on social media.

He said it was also easy to overshoot the runway because “it is considered short”. Built by the Americans in the 1930s, the runway is restricted by topography. 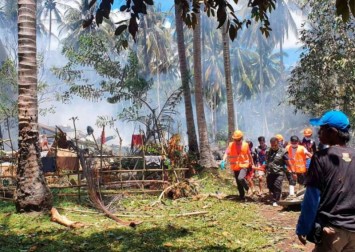 “At one end is the sea, at the other end is elevated hilly terrain beside a community. Aircraft can only enter and exit from the sea-end of the runway and because of the upland areas you quickly run out of runway.”

Custodio also speculated that the pilot’s failure to easily manoeuvre the plane may have been because it was fully loaded. It had 96 people on board, including their gear and possibly ammunition, plus fuel for the return flight as there is no refuelling station in Jolo.

He said the fact that some of the passengers were seen jumping out of the plane before it exploded meant they knew something had gone wrong.

Custodio said the last major military plane crash was in April 1971 when a Philippine Air Force Douglas C-47 Skytrain (DC-3) crashed when its left engine failed soon after take-off from Basa Air Base in Pampanga, killing all 40 on board.

In more recent years, however, several air crashes have marred the record of the Philippine Air Force. Custodio partly blamed this on President Rodrigo Duterte’s refusal to ask for American help during natural disasters.

“For me, it’s Duterte’s fault that our air assets have been overworked because nobody wanted to make the decision to allow the US to assist us. They just left the Air Force to work solo during typhoons and disasters,” he said.

In January this year, a UH-1H Huey helicopter crashed, killing all seven on board. This led to the grounding of around 20 Hueys. Custodio explained that the military has a policy of grounding all similar types of aircraft whenever a crash occurs. 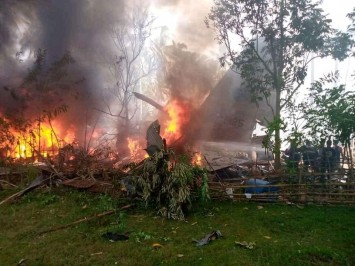 Because of the C-130 crash, Senator Richard Gordon urged the government to buy more C-130s. “Singapore, an island state as big as SBMA [Subic Bay Metropolitan Authority], has 10 C-130s. Thailand has 12. We have only three C-130s and just lost 1!”

And on the night of June 23, an S-70i Black Hawk Utility helicopter with night-flying capability also crashed, killing all six on board. Custodio said this led to the grounding of about a dozen other Black Hawks that had just arrived, all brand new and bought for US$241 million (S$78 million) from Polish company PZL, which manufactures them under licence from Sikorsky USA.

Asked what Air Force assets were still flying, Custodio said that as far as he could tell, half of the helicopter fleet was grounded and only the small planes like the Bell 205 and 412 can currently fly.

Presidential spokesman Harry Roque on Monday said the incidents would provide “impetus for further modernisation” of the armed forces, adding that the whole country is in mourning.

Duterte flew late on Monday to the military camp in Zamboanga City where the remains of the victims and the injured passengers had been taken. He vowed to have “a bigger budget for the Armed Forces of the Philippines” and promised educational assistance to the children who lost their fathers.

He also awarded medals to all those who had been on board and gave one of his shortest speeches, saying “I am at a loss for words”.