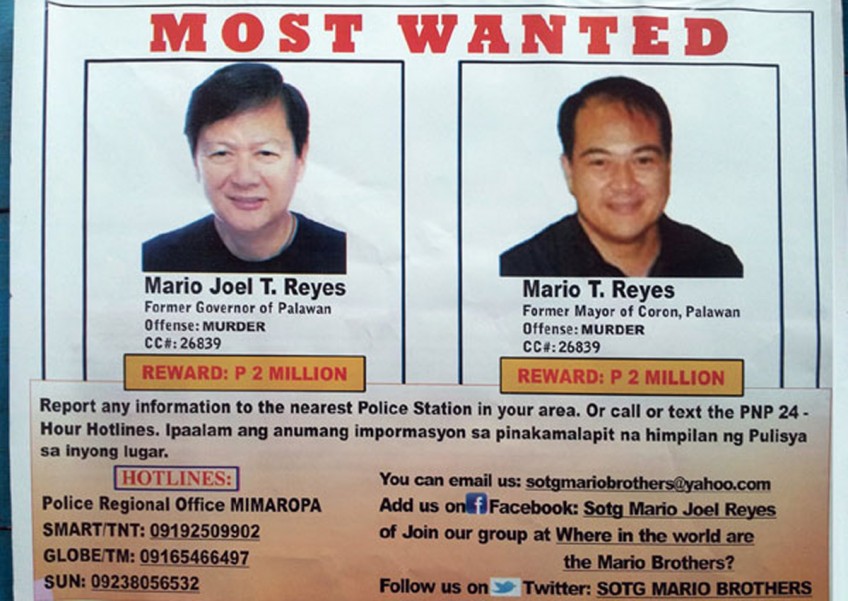 MANILA - Two Philippine politicians wanted over the murder of a prominent anti-corruption crusader have been arrested in Thailand after more than three years on the run, the president's office said Monday.

Joel Reyes, the former governor of Palawan island, and his brother Mario, a former town mayor, were detained on the Thai holiday island of Phuket on Sunday, said presidential spokesman Herminio Coloma.

The Reyes brothers are facing murder charges over the 2011 death of Gerry Ortega, a prominent Palawan environment activist who had also used a radio show he hosted to frequently accuse the Reyes brothers of massive graft.

The brothers went missing in early 2012 after an arrest warrant was issued for them, and had not been seen since.

"The arrest of the long-wanted Reyes brothers provides an opportunity for pursuing the ends of justice," Coloma said in a statement.

He thanked Interpol and the Thai police for their help in arresting the Reyes brothers, but did not provide further details.

Ortega was shot in the head at point-blank range while shopping in the capital of Palawan, an island known as the Philippines' last environmental frontier but which has suffered from illegal logging, mining and overfishing.

The gunman was caught trying to flee the scene and police said his weapon was owned by one of Joel Reyes's lawyers.

Aside from alleged environmental crimes, Ortega had accused Joel Reyes of syphoning off millions of dollars in revenues from a gasfield off the coast of Palawan when he was governor.

The brothers' escape reinforced the Philippines' reputation for having a "culture of impunity", with powerful men free to kill or intimidate political opponents, journalists and other critics without any punishment.

At least 168 journalists or media workers have been killed since the restoration of democracy in the Philippines in 1986, but only 13 cases have seen murder convictions, according to local press groups.

Patty Ortega, widow of the murdered activist, told AFP a task force assigned to capture high-profile fugitives had informed her of the arrests.

She expressed relief but also said she was worried about whether the Reyes brothers could still evade justice.

"We still feel anxiety. Our judicial system is not that fast. We know our opponents have a lot of advantages. They have money, influence. They slipped through immigration. So it is not far from our thoughts that something else might happen," she said.

"I want to see them handcuffed and facing a court and in jail."