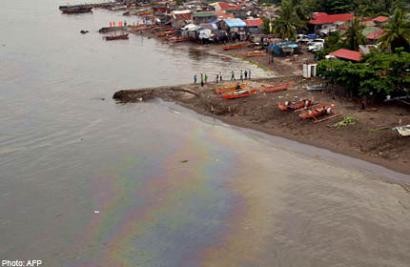 MANILA - The Philippines' largest oil refiner Petron Corp. has claimed responsibility for a huge diesel spill that shut down parts of Manila Bay's vital fishing industry, threatening the livelihoods of tens of thousands.

Authorities said an estimated 500,000 litres of oil cast a slick across 20-kilometres (12 miles) of the coastline on Thursday close to a Petron fuel depot in Rosario town, south of the capital Manila.

"At this stage, we take responsibility for this unfortunate incident", Petron President Lubin Nepomuceno said in a statement posted on the company's Facebook page late Monday.

"We will pursue proper remediation and cleanup of the areas affected, aiming to restore the means of livelihood of the local communities. In the meantime, we will continue to give the assistance needed by residents affected by the spill."

He added: "We sincerely apologise and assure all the communities affected that we will strive to resolve the situation at the soonest possible time."

Jose Ricafrente, the mayor of Rosario - one of the hard-hit coastal towns - said the spill had temporarily left about 40,000 residents dependent on the region's fishing industry out of work.

The coastguard has said the entity found responsible for the spill is required by law to pay for the cleanup, and individuals could additionally face criminal charges if found liable for negligence or deliberate discharge into the water.

It said the diesel was expected to evaporate in a few days. Coastguard officials were unavailable for comment Tuesday.

A spokeswoman for San Miguel Corp., the parent company of Petron, said an updated statement would be released later Tuesday.