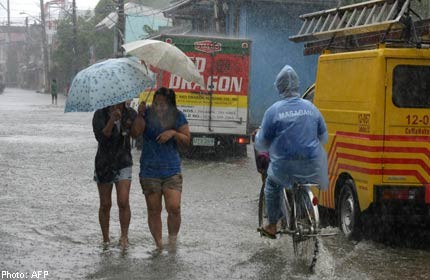 Residents wade through ankle-deep water along a flooded stretch of road as heavy rains brought on by Typhoon Utor hit the suburbs of Manila on August 12, 2013.

The government said four people had been confirmed killed and 11 were missing after Utor, the strongest storm this year, swept across the north of the country on Monday.

First television footage of the impact there showed barefoot children standing expressionless among broken furniture in the flattened remains of their house.

The footage, taken by an ABS-CBN crew who joined del Rosario on a brief visit, showed roofs blown off entire neighbourhoods with some homes reduced to rubble. Other buildings had windows blown out.

A huge gap showed where a bridge used to span a river, and groves of coconut trees were shorn of their leaves and fruit.

Del Rosario said two out-of-town fishermen who had sought shelter in Casiguran had been killed, while several locals were treated for cuts and other minor injuries.

"They were told to seek shelter in the evacuation centres, but instead these two fishermen slept in their boat. In the morning they were found dead," he told a news conference.

A man drowned and another was buried by a landslide elsewhere on Luzon island, while 11 were missing after the typhoon struck, the disaster agency added.

Soldiers clambered over landslide-choked roads to reach Casiguran and nearby areas on foot Tuesday. The highway to Casiguran should reopen on Wednesday after bulldozers were used to remove landslides and fallen trees, said provincial disaster official Elson Egargue.

The Philippines is one of the world's most vulnerable countries to typhoons. Storms often make their first landfall there after they form over the Pacific Ocean and move west.

Hundreds of people die from the roughly 20 typhoons or tropical storms that strike the country each year.

Utor hit land with wind gusts reaching 200 kilometres (125 miles) an hour early Monday, making it the strongest storm this year, according to the weather bureau.

Joe Curry, country chief of the aid group Catholic Relief Services, and others involved in the rescue said the death toll may be lower than feared because residents were well prepared.

"I think people are agreeing that these places have been hit many times before, so they know how to deal with typhoons. The flood damage is less than it has been before," Curry said.

Nevertheless, more than 30,000 people were in temporary shelters on Tuesday after Utor destroyed more than 2,000 homes, the civil defence office said.

Of the 11 people listed as missing, one was a woman filmed by a television crew as she stood crying for help atop her house that was swept away by a swollen river.

"The community was evacuated before the onslaught of the typhoon but she refused to be evacuated," said Norma Talosig, civil defence chief for the area.

On Tuesday night Utor was in the South China Sea tracking towards southern China, according to the Hong Kong Observatory.

Waves as high as 11 metres (36 feet) were expected in the north of the South China Sea from Tuesday night into Wednesday, China's National Marine Environmental Forecasting Center said, according to state news agency Xinhua.

Working teams had also been requested to direct disaster prevention efforts in Guangdong province, where the typhoon is expected to make landfall between Wednesday evening and Thursday morning, Xinhua reported.

Winds up to 98 kilometres (60 miles) per hour hit Hong Kong in the early hours of Wednesday as Utor centred 300 km southwest of the city, according to the observatory, and a Number 8 storm signal was raised.