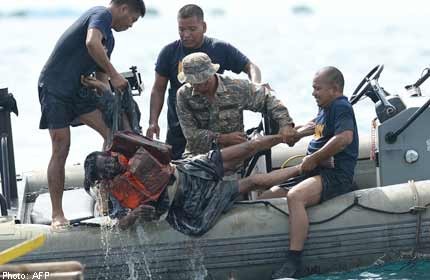 CEBU, THE PHILIPPINES - Philippine rescuers struggled in rough seas on Sunday as they resumed a bleak search for 170 people missing in the Philippines' latest ferry disaster, but insisted miracle survivor stories were possible.

Thirty-two people have been confirmed dead after the ferry, carrying 830 passengers and crew, sank almost instantly on Friday night following a collision with a cargo vessel outside a major port in the central city of Cebu.

Stormy weather forced an early suspension of search-and-rescue operations with a few hours of daylight remaining on Saturday, and similar conditions hampered the effort when rescuers returned to the waters at dawn on Sunday morning.

Navy spokesman Lieutenant-Commander Gregory Fabic said the weather had again prevented divers from reaching the sunken vessel, where many of those missing were believed trapped, but rescuers would make every effort to get there.

"It is possible that there are air pockets in its compartments and there might the survivors," Commander Fabic told AFP, adding people could survive for 72 hours in such conditions. "There is still hope that there might just be survivors there."

Meanwhile, navy vessels, Coast Guard personnel on rubber boats and volunteer fishermen scoured about 3 sq km of water outside the port for anyone who may still be floating. Nevertheless, the authorities cautioned that the odds of finding any more survivors were low.

"We are still hopeful, although you have to accept the reality that their chances of survival are very slim," the head of the provincial disaster management office, Mr Neil Sanchez, told reporters from rescue command centre at the port.

The ships collided as they were going in opposite directions at a well-down choke point near the mouth of Cebu's port. The authorities said the St Thomas Aquinas ferry sank within 10 minutes of the crash.

The cargo ship, Sulpicio Express 7, which had 36 crew members on board, did not sink. Its steel bow had caved in on impact, but it sailed safely to dock.

One survivor, Mrs Lolita Gonzaga, 57, recalled the terror of falling from the top deck of the ship to the bottom level when the collision occurred, then the horror of escaping the black waters with her 62-year-old husband.

"When we were rescued, we had to share the rubber boat with a dead woman. She was just lying there," Mrs Gonzaga told AFP on Saturday from a hospital bed in Cebu where she was nursing spinal injuries.

Government regulator the Maritime Industry Authority said both vessels had passed safety checks and were sea worthy, indicating human error was to blame for one of the ships going into the wrong lane.

Ferries are one of the main forms of transport across the archipelago of more than 7,100 islands, particularly for the millions of people too poor to fly. But sea accidents are common, with poor safety standards and lax enforcement typically to blame.

The world's deadliest peacetime maritime disaster occurred near the capital Manila in 1987 when a ferry laden with Christmas holidaymakers collided with a small oil tanker, killing more than 4,300 people. In 2008, a huge ferry capsized during a typhoon off the central island of Sibuyan, leaving almost 800 dead.