Malaysia and The Philippines have been battling over the oil-rich state of Sabah on the northern tip of Borneo.

A Philippine senator has asked the government to "seize the opportunity" to stake the country's claim to Sabah, following the US$14.9 billion (S$21.4 billion) arbitration award given in March to the heirs of a 19th century sultanate against Malaysia.

Francis Tolentino, who scrutinised Foreign Affairs Secretary Enrique Manalo's stand on the dispute during a senate hearing on his nomination, said the implication of the ruling was clear – that the Philippines "owns" the oil-rich state on the northern tip of Borneo.

Tolentino added that 750,000 Filipinos lived in Sabah without health or social security benefits and were stateless.

"The Department of Foreign Affairs should now seize the opportunity. We won.

"Whether that was initiated by a private group is irrelevant. The implication is that we own Sabah," broadcaster ABS-CBN quoted the senator as saying on Wednesday (Sept 28).

Tolentino also called on the foreign ministry to consult arbitration experts because Manila had lost many of its arbitration cases.

"Have a group in your department to be familiar with arbitration because we have to hire foreign lawyers, we have to pay millions of dollars and we have lost all our cases…I think you should have an expertise on this," he said.

Responding to Tolentino's assertion, Manalo, who was appointed by the senate, said the government already had a "cluster committee" that studied the impact of the ruling before the start of the new administration under President Ferdinand Marcos Jnr.

"We have our standing claim to Sabah. That is there in the constitution," Manalo said.

He added his ministry would reconvene the panel to continue its assessment because the legal private award may have "implication on our sovereignty claim".

A French arbitration court in February ordered Malaysia to pay US$14.9 billion to the descendants of the last Sultan of Sulu to settle a dispute over a colonial-era land deal, but Malaysia said in July the Paris Court of Appeal had "stayed" the ruling, after finding that enforcement of the award could infringe the country's sovereignty.

The government said the stay would prevent the award from being enforced as Malaysia works to set aside the ruling.

Lawyers for the claimants, however, said the February ruling remains legally enforceable outside France through the New York Convention, a UN treaty on international arbitration recognised in 170 countries.

The heirs claim to be successors-in-interest to the last Sultan of Sulu, who entered a deal in 1878 with a British trading company for the exploitation of resources in territory under his control, including what is now Sabah, on the northern tip of Borneo.

Malaysia took over the arrangement after independence from Britain, annually paying a token sum to the heirs, who are Philippine nationals.

But the payments were stopped in 2013, with Malaysia arguing that no one else had a right over Sabah, which was part of its territory.

In July, the litigants moved to seize two Luxembourg-based units of Malaysian state oil firm Petronas as part of efforts to enforce the award. 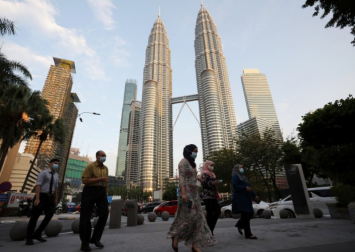 Malaysian Prime Minister Ismail Sabri Yaakob said in the same month that a special task force was set up to investigate the issue thoroughly, not only concerning Petronas assets but also the country's other assets abroad.

Lawyers for the heirs said the Petronas units were now under the control of bailiffs in Luxembourg, pending any appeal by the company against the seizure.

Last week, Princess Jacel Kiram of the Sulu Sultanate urged President Marcos, who is yet to convey his government's position on the territorial dispute, to help with their claims.

"We don't have to have a dispute against our neighbour. We have to protect each other," Kiram told ABS-CBN.

"The Sultanate of Sulu is open for talks, we just have to sit down and come up with a win-win solution for the people of Malaysia and our people."