Philippines appeals to China for priority with Covid-19 vaccine

Shopping mall workers wearing masks for protection against the coronavirus disease wait for a shuttle outside a mall, in Makati City, Metro Manila, Philippines, on July 24, 2020.

The Philippines has reached out to China for help in managing its response to the coronavirus pandemic in the face of rising numbers of infections.

Philippine President Rodrigo Duterte said that a few days ago he asked President Xi Jinping to allow his country to be among the first to receive any supplies of a Chinese-developed vaccine against the coronavirus.

And, "if we have to buy it, that we will be granted credit so that we can normalise (the country's situation) as fast as possible", Duterte said.

Duterte revealed the request on Monday during his annual address to the nation, which also marked the opening of the 18th Congress of the Philippines.

Chinese Foreign Ministry spokesman Wang Wenbin said on Tuesday that the Philippines is a friendly neighbor and China is willing to give priority to the country in terms of access to vaccines.

The country had logged 83,673 Covid-19 cases as of Tuesday, the country's health department said. The country stands out as having one of the highest caseloads of the virus in Southeast Asia. Roughly 30 per cent of those infected have recovered.

Duterte, who is in the fourth year of a six-year term, said the country's economic gains "were put to a test when the pandemic suddenly struck the global community".

But he decided "to prioritise life over other considerations", explaining the rationale for the government's lockdown and social distancing measures.

The capital region of Metro Manila has been under community quarantine since mid-March － one of the world's longest lockdowns. 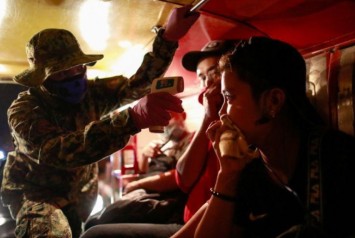 "According to experts, the interventions that the government had put in place prevented as much as 1.3 to 3.5 million infections.

"To me, even if the numbers were much lower, it would still be and would have been worth the sacrifices we made," said Duterte, adding that the government is ramping up the country's testing capacity.

Duterte said there are now 93 accredited testing laboratories across the country, noting that health officials aim to conduct 1.4 million tests by the end of this month.

Among the measures, legislation for the Bayanihan to Recover as One Act would earmark 140 billion pesos (S$3.9 billion) for the purchase of test kits and extend assistance to the labor, transportation, tourism and agriculture sectors.

The Corporate Recovery and Tax Incentives for Enterprises Act would see the corporate income tax rate cut from 30 per cent to 25 per cent.

The Financial Institutions Strategic Transfer Act would allow banks and other financial institutions to dispose of and transfer bad loans to asset management companies. 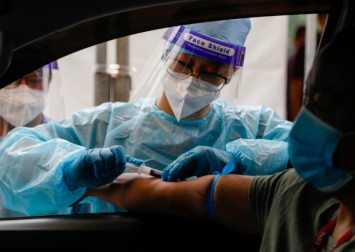 Analysts said the Philippines has a strong fiscal position and they expect the government will use it to mitigate the impact of the pandemic on the country's economy.

The Philippines' GDP contracted by 0.2 per cent in the first quarter and the country's economic managers forecast that this year's GDP might decline as much as 3.4 per cent－the first contraction in more than 20 years.

"The Philippines entered the pandemic with a solid fiscal position with a low debt level and a decent deficit-to-GDP ratio," said Nicholas Antonio Mapa, a senior economist at the Netherlands-based investment bank ING.

"What we need from the government is their willingness to put their solid fiscal position to good use by spending (and at times borrowing) their way back to growth."

'Not wasting a crisis'

Mapa said he supports the passage of the Bayanihan to Recover as One Act as it will boost sagging domestic consumption and improve the public healthcare system.

Ruben Carlo Asuncion, chief economist of Union Bank of the Philippines, said the passage of legislation such as the Corporate Recovery and Tax Incentives for Enterprises Act will have a more lasting impact on the economy. 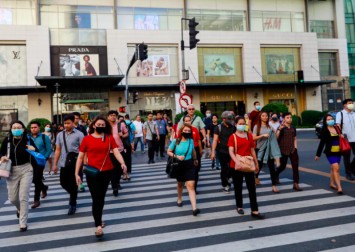 "This is clearly about a 'not wasting a crisis' mindset.

"This bill will help the government to improve its industrial development policy and attract the necessary investments, both local and foreign," Asuncion said.

The Philippines was one of world's fastest-growing economies, and expanded by an average of 6.6 per cent in the past few years. But the pandemic seems to have veered the economy toward a technical recession in the first half of the year.

Analysts believe that the government can also do more to address the pandemic.

Herman Joseph Kraft, associate professor of political science at the University of the Philippines, said the "underwhelming part" of Duterte's address is the paucity of details about the measures to mitigate the impact of the pandemic on ordinary Filipinos.