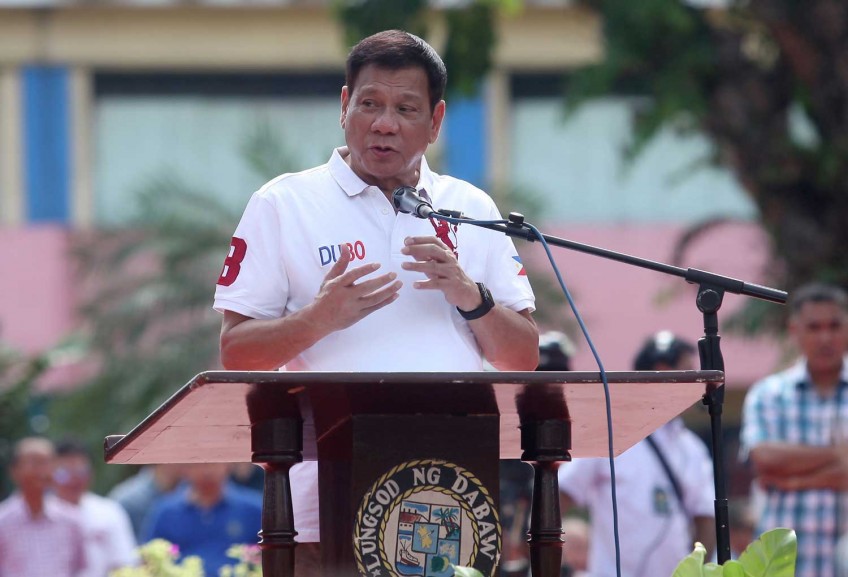 MANILA - Philippine president-elect Rodrigo Duterte takes office this week looking to end the domination of "Imperial Manila" with a radical shift to federalism that he says is vital to fighting poverty and ending a deadly Muslim separatist insurgency.

Duterte, who won last month's elections in a landslide, has vowed to have the constitution rewritten to achieve his bold plans -- which would see power devolved from the central government in the capital to newly created states governing the current 81 provinces.

"It (the current system) is an excuse for them to hang onto power in Imperial Manila. They have always been there in one single office, running the Philippines," Duterte said in a speech during the election campaign.

Such comments are typical fare for Duterte, an anti-establishment figure who relentlessly rails against the elites who have mostly ruled the Philippines since independence from the United States after World War II.

Duterte will on Thursday take over from Benigno Aquino, who remains a generally popular figure but nevertheless comes from one of the remarkably small number of wealthy clans that have long dominated national politics and overseen one of Asia's biggest rich-poor divides.

Duterte will become the first president from the vast southern region of Mindanao, which is one of the nation's poorest areas and home to decades-old communist and Muslim insurgencies that have claimed tens of thousands of lives.

Highlighting his antipathy for Manila rule, Duterte snubbed his proclamation by Congress as the winner of the elections -- an event normally rich in tradition and ceremony.

Duterte has also travelled to the capital just once since winning the election, and vowed to spend the bulk of his six years as president based in Davao, which has less than two per cent of the nation's population and is 1,000 kilometres (600 miles) from Manila.

Under Duterte's federal set-up, the states will be largely autonomous and allowed to retain most of their income, rather than remitting it to the central government, which he believes will be a key driver of economic growth in the impoverished countryside.

He has said the central government would retain essential national functions, such as defence, foreign policy and customs.

Duterte has repeatedly said one of the main benefits of federalism would be to end separatist rebellions waged by the country's impoverished Muslim minority because they would in effect have autonomy in the new states.

"Nothing short of a federal structure will give Mindanao peace," Duterte said on the campaign trail, and broadly supportive comments from Muslim rebel leaders in recent weeks have indicated they are receptive to the plans.

Amending the constitution is a highly sensitive subject in the Philippines.

Lawmakers have not touched it since it was rewritten in 1987 following the "People Power" revolution that overthrew dictator Ferdinand Marcos the previous year.

The constitution was redrawn to put in place safeguards to avoid another dictatorship, including limiting presidents to a single term of six years.

Tentative attempts by previous presidents to revise the constitution failed amid strong opposition from groups that feared the leaders were merely seeking to extend their reigns.

However Duterte, flush with his election success that has seen political opponents swiftly shift allegiances to him, is confident of enjoying big majorities in both houses of congress, as well as broad popular support, to propel his push.

With Duterte due to turn 77 at the end of his presidential term, many voters do not see him as someone who will want to extend his rule.

Seeking to capitalise on his early-term popularity, Duterte is aiming to lay the framework for a referendum to change the constitution in the first half of his presidency, according to his allies.

Still, what would be the biggest shake-up to Philippines' democracy since 1987 is by no means assured, and political analysts say opposition could build.

Critics have accused Duterte of being very vague about his plans, questioned whether federalism is indeed the panacea to the nation's woes, and warned that it could cause more problems than it solved.

In a nation which already has issues with weak governance like the Philippines, federalism might result at worst in the break up of the country, according to Temario Rivera, chairman of the Center for People Empowerment in Governance think-tank.

He said federalism could strengthen the hold of political dynasties or clans that already monopolise power in local governments, often through the use of private armies, with a weakened central authority unable to respond.

"Shifting to a federal system will have uncertain and unpredictable results," Rivera told AFP.