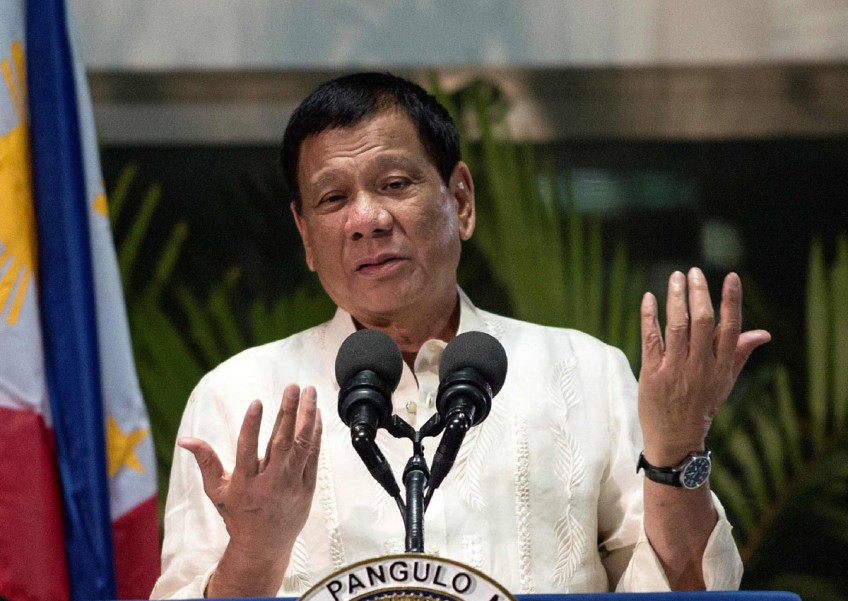 Manila - Philippine President Rodrigo Duterte on Thursday described two major media outlets as "sons of whores" and warned them of karmic repercussions for their critical coverage of his deadly drug war.

Duterte's verbal attacks on top television broadcaster ABS-CBN and the Philippine Daily Inquirer newspaper came in a pair of speeches in which he also lashed out at the European Union for criticising him over alleged human rights abuses.

"I'm not threatening them but someday their karma will catch up with them," Duterte said of the two media outlets.

"They're shameless, those sons of whore journalists." Duterte named the Prieto and Lopez families that own the Inquirer and ABS-CBN respectively, calling them "oligarchs" who use the media to promote their chosen political candidates.

"That is what ails the Philippine society: it is the corrupt media, the face of Prieto and Lopez and their money and the church," he said.

He also threatened to use the government TV station to shame those two families.

"I will give you your due also. I will go through your lives and those of your children," on government television, he said.

Since taking office in June, police have reported killing at least 2,564 people in drug raids while more than 4,200 others have been killed in unexplained circumstances, according to official figures.

Rights groups have warned he may be overseeing a crime against humanity, while the European Parliament has been among other extremely critical foreign institutions.

Duterte frequently responds to criticism with foul-mouthed defiance. He also branded then US president Barack Obama a "son of a whore" last year.

But rights groups say many people are also too afraid to speak out, citing his fiery rhetoric and various alleged intimidation tactics.

Last year, Duterte made comments widely interpreted as justifying the murders of some journalists.

"Just because you're a journalist you are not exempted from assassination, if you're a son of a b****," he said.

He has also described Jun Pala, a journalist who was murdered in the southern city of Davao in 2003 when Duterte was mayor there, as a "rotten son of a b****".

Pala's murder has never been solved but in recent weeks, a former police aide of Duterte said the then-mayor ordered the killing.

In a statement late Thursday, the Philippine Daily Inquirer said it took "exception" to his accusation that it was unfair in its coverage.

"Since its founding in 1985 the Inquirer has upheld the highest standards of excellence in journalism," the statement said.

"Even as we've courageously pursued the truth in our coverage, we've endeavoured to get the administration's side on any controversy."

The National Union of Journalists of the Philippines issued a statement saying: "Mr. Duterte, your mouth is getting the better of you!"

"Your incoherent and foul mouthed rant against two of the country's major media outfits - the Philippine Daily Inquirer and ABS-CBN - was not only unwarranted, it was absolutely twisted," the statement said.