MANILA - Thousands of children in the Philippines returned to school on Monday (Nov 15) for the first time in nearly two years, kicking off a pilot scheme to resume face-to-face learning after the pandemic disrupted the education of 27 million students.

A hundred public schools in lower-risk areas are holding classes in person for a two-month pilot run, with the reopening of more dependent on vaccination rates and a sustained decline in Covid-19 cases.

The Philippines, which had imposed some of the world's longest lockdowns, is among the last countries to reopen schools, in stark contrast to many western countries.

"We are happy to see our learners inside our classrooms as we recognise the significance of face-to-face learning in their social development," the education ministry said in a statement.

Authorities have reduced class sizes by half and allowed only vaccinated teachers and school personnel to interact with students.

Photos shared on social media showed students wearing masks and inside classrooms with chairs and tables separated by plastic sheets, while hand-washing stations were installed. 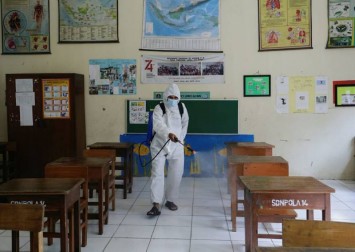 The United Nations children's agency Unicef has backed the Philippines' phased, voluntary and safe reopening of schools, as it has warned the "learning crisis could turn into a learning catastrophe."

The availability of computers, phones and internet, and the uneven education quality, have been cited as challenges for remote learners in the Philippines, where some children have to climb onto roofs to get data signals.

In a report in April, the Asian Development Bank estimated school closures of more than a year could slash future earnings among the region's students by as much as US$1.25 trillion (S$1.69 trillion), equivalent to 5.4 per cent of 2020 GDP.

"The DedEd (Department of Education) is excited for the children as they go back to schools, but there's also a bit of anxiety," Roger Masapol, director of planning service unit, said in a radio interview.