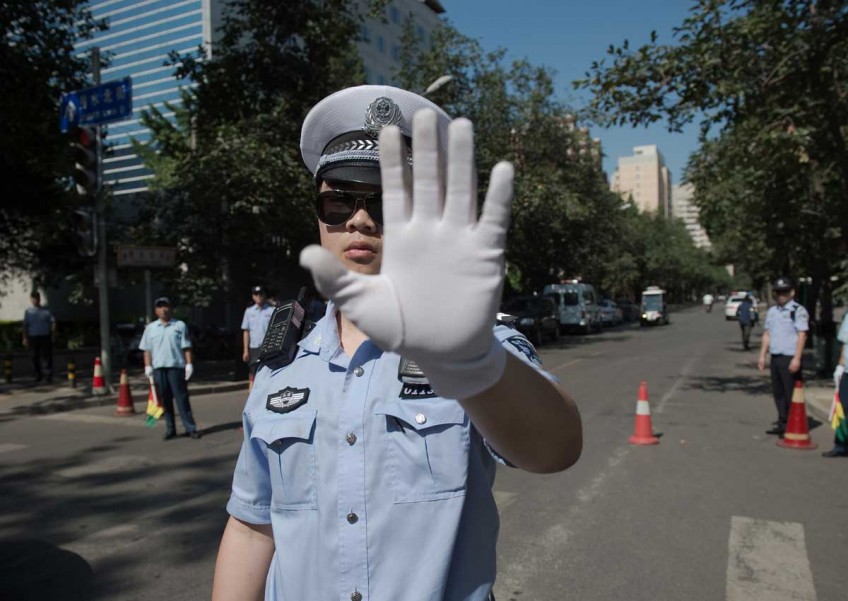 Chinese police officers block the road leading to the Philippines embassy in Beijing on July 13, 2016 the day after an international court on July 12 ruled against China in a Philippine challenge over Beijing-occupied territory in the South China Sea.
AFP

MANILA - The Philippines urged Beijing on Thursday to respect an international tribunal's ruling that rejected Chinese claims to most of the South China Sea, and said it would raise the issue at a regional summit.

"Secretary Yasay will discuss within the context of ASEM's agenda the Philippines' peaceful and rules-based approach on the South China Sea and the need for parties to respect the recent decision," the foreign affairs department said in a statement.

The statement was the strongest response from the Philippines to Tuesday's verdict by the Permanent Court of Arbitration in The Hague declaring that China's claims to the resource-rich and strategically vital South China Sea had no legal basis.

China vowed to ignore the ruling, saying the UN-backed tribunal had no jurisdiction over the case and accused it of bias.

China on Wednesday also raised the prospect of confrontation in the sea, and threatened to introduce an air defence zone over the sea that would give its military authority over foreign aircraft.

China said on Monday that the maritime dispute should not be included on the ASEM agenda, with assistant foreign minister Kong Xuanyou insisting the meeting was "not an appropriate venue" to discuss the issue.

The ASEM summit brings together nations from Asia and Europe, including other sea claimants Vietnam and Malaysia.

In his first comments immediately after the ruling, Yasay said the Philippines welcomed the decision but he did not urge China to respect or abide by it.

Yasay called then only for "all those concerned to exercise restraint and sobriety".

Yasay will at ASEM represent President Rodrigo Duterte, who has signalled he wants to avoid a major diplomatic falling-out with China over the issue.

In his first cabinet meeting after being sworn into office on June 30, Duterte said he would not "taunt or flaunt" a favourable ruling and aim for a "soft landing".

The Philippines filed the legal challenge against China in 2013 under Duterte's predecessor, Benigno Aquino.

Relations between China and the Philippines plummeted over the row.

China claims nearly all of the sea, even waters approaching the coasts of the Philippines and other Southeast Asian nations.

China justifies its claims by saying it was the first to have discovered, named and exploited the sea, and outlines its claims for most of the waterway using a vague map made up of nine dashes that emerged in the 1940s.