Philippines wants to use more US military assets 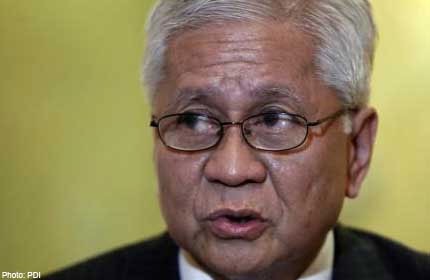 MANILA - The Philippines said Monday it would insist on being allowed to use more US military assets to protect its sea territories, when talks on expanding a defence pact start this week.

Foreign Secretary Albert del Rosario said the longtime allies had already agreed in principle to allow a bigger US military presence in the Philippines.

He said the talks would focus on the rules for the greater presence, and the Philippines wanted to ensure the deal helped build its defence capabilities.

"We stand ready to tap every resource, to call on every alliance, to do what is necessary, to defend what is ours, to secure the nation and to keep our people safe," he said.

The Philippines has been seeking greater military help from its longtime ally and former colonial ruler, amid a deepening rift with China over rival claims to parts of the South China Sea.

While the United States has insisted it does not take sides in the dispute, it has been seeking to rebuild its military footprint in the Philippines as part of President Barack Obama's strategic "pivot" to Asia.

The Philippines had hosted tens of thousands of US soldiers at two bases north of Manila, but they were forced to leave in 1992 after the Senate voted to end their lease contracts amid strong anti-American sentiment.

A new agreement that went into force in 1999 allowed US troops to return to the Philippines for joint military exercises, and thousands of American soldiers regularly flow through the country during war games.

US special forces have also been rotating through the southern Philipines since 2002 to help Filipino soldiers against Al-Qaeda-linked militants, with the maximum number there at any one time believed to hover at about 600.

Philippine authorities have said the new agreement will pave the way for more joint war games.

Philippine defence undersecretary Pio Lorenzo Batino told reporters on Monday the new talks would also seek to allow the "prepositioning" of US military assets back on Philippine bases.

He said, in return, the Philippines wanted to use the assets to help defend its sea territory, although he did not specifically mention the dispute with China.

"We believe that those US equipment to which we will agree to be temporarily deployed could supplement the (Filipino military's) capability to perform its functions in key mission areas of maritime security, maritime domain awareness and humanitarian response and disaster relief," Batino said.

"We will insist on that," he said, when asked whether the Philippines wanted to use the American military hardware.

The talks will begin in Manila on Wednesday. Philippine officials said they wanted to finalise the agreement this year.