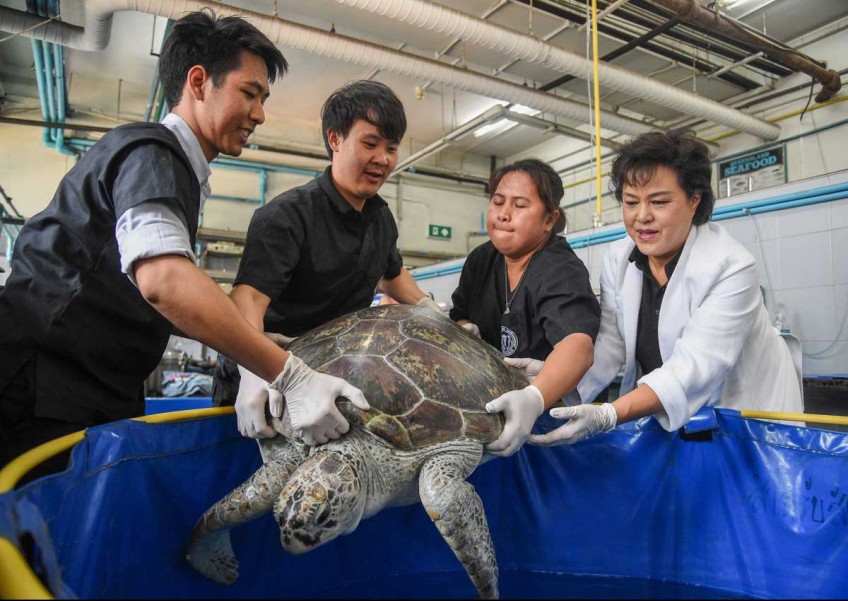 Dr Nantarika Chansue (right), the chief surgeon who operated on the turtle Ormsin that died after swallowing hundreds of coins, has set up a fund for saving marine lives.
The Nation/Asia News Network

The death of Ormsin, a sea turtle that died after swallowing hundreds of coins, has triggered increased public awareness regarding incorrect beliefs about merit making and the urgent need to protect marine animals.

Dr Nantarika Chansue, the chief surgeon who operated on the turtle, has set up a fund for saving marine lives, which has received copious donations varying from Bt200 (S$8) to Bt10,000 (S$400).

Nantarika is the director of the aquatic animal medicine unit at Chulalongkorn University's Faculty of Veterinary Medicine.

The doctor told Nation Multimedia Group digital reporter Suthichai Yoon in a Facebook Live interview on Wednesday morning that the budget allocation and dedicated medical personnel to treat marine animals was insufficient, with most veterinary resources allocated for terrestrial animals such as horses and livestock.

She said portable veterinary endoscopes were needed so that when animals get sick, veterinarians can make a diagnosis without going to a clinic.

"The price of the endoscopes is about Bt2.5 million. The apparatus allows a visual examination of internal organs and body parts without invasive exploratory surgery," she said in the interview.

"With the equipment, we do not have to cut into the body of animals like we did with Ormsin to extract coins," she said, referring to the six-hour operation on Ormsin.

The veterinary team had to cut through the turtle's shell and remove the coins one by one. "With the endoscopes, the vets could perform the operations from outside with the help of a monitor screen."

If her agency obtains the equipment, other clinics would be allowed to use it, she said.

Nantarika also repeated her calls for people to stop tossing coins into animals' habitat, which is believed to result in good luck and long life. Suthichai replied that her advice had also been heard in foreign countries as international news agencies reported about the plight of Ormsin.

The vet team planned to stuff Ormsin for further study.

"Monks and fortune tellers should stop telling people to make merit by releasing turtles, eels and fish at temples where there is no suitable environment for the animals. They can get sick and die," she said.

People who see ailing turtles should take them to nearby veterinarian clinics, which could ask for help from her facility, Nantarika said.

"Nowadays, there are variety of technologies that can help take care of sick turtles, like taking their photos and sending the images to us via Line," she said.

People who want to donate to Nantarika's unit can do so via the Krungsri Bank account 123 1 3567 at the Siam Square branch.