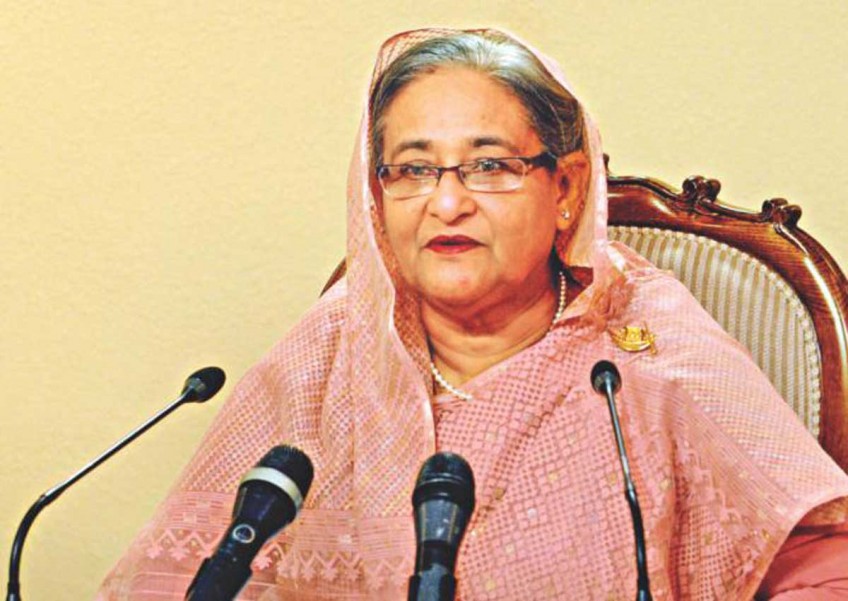 Prime Minister Sheikh Hasina has said no one will be allowed to harm religious harmony in the country, and that her government will get tougher on troublemakers.

"We are taking stern action against those who are on the wrong path. If necessary, we will get tougher," she said in an address to the nation yesterday, marking the second anniversary of her government's assuming office.

In her half-an-hour televised speech, the PM mostly highlighted the success stories of the government. She called upon people to keep up efforts for the country's progress, rising above their beliefs and party affiliations.

"The country today stands on the road to development. Let's build a developed and prosperous nation free from hunger and poverty."

Bangladesh is now a role model of development in the world, she said.

Whenever the Awami League came to power, it worked for the country's development, said the PM.

Hasina, also president of the AL, criticised the BNP and the Jamaat-e-Islami for "resorting to violence and arson attacks" ahead of the January 5 election of 2014 and also after the first anniversary of her government's assumption of office last year.

She also remembered the victims of "BNP-Jamaat's violence".

The BNP-Jamaat men, who "murdered people and destroyed public properties by arson attacks", must be punished, she said.

The PM also blasted BNP Chairperson Khaleda Zia for raising questions about the number of martyrs in 1971. She warned that no scoffing at the Liberation War and freedom fighters would be tolerated, and urged people to unite against it.

When Bangladesh is moving forward through united efforts, anti-liberation forces and their collaborators are trying to create instability and chaos in the country, she said.

"The main target of the defeated forces in the Liberation War is to promote militancy and save war criminals, mass murderers and Razakars-Al-Badrs."

The PM asserted that no one would be able to hinder the war crimes trial.

Pointing to the BNP and its ally Jamaat, she said people boycotted those who do not want war crimes trial.

On the December 30 municipal election, she said, "The polls were freer, fairer and more peaceful than those in the past."

"You [People] have elected your candidates, and rejected militants and arson attackers. I thank you for this."

Referring to the Gallup hope index, the PM said Bangladesh is the most hopeful nation after Switzerland in the world.

Seeking support from all, she said, "Taking the hopeful and confident countrymen along, I will turn Bangladesh into a middle-income country by 2021, and a prosperous and developed nation by 2041."

"We are a victorious nation. No one will be able to subdue us," added Hasina.