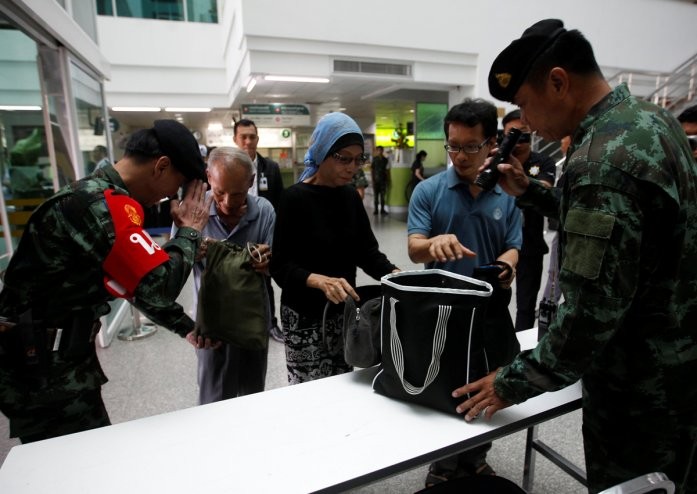 Thai military personnel check the bags of visitors at an entrance of the Phramongkutklao Hospital in Bangkok, Thailand, May 23, 2017.
Reuters

The Metropolitan Police Bureau has ordered all stations in the capital to speed up checks of surveillance cameras in their areas in a bid to provide better safety for the public.

Deputy chief of the Metropolitan Police Bureau Pol Maj Gen Surachai Kuandechakup said yesterday that he had ordered all 88 police stations in Bangkok to check if CCTV cameras work properly or need any repairs after some small explosions in the capital in recent months.

He also ordered city police to patrol important and crowded |locations in order to prevent any criminal or illegal activity.

Surachai said he also instructed police stations to speed up the formation of a network to monitor risky incidents.

[[nid:389420]]  There have been three blasts in Bangkok over the past two months, but authorities have said a suspect arrested this week confessed to being behind the bombs.

The suspect was identified as Wattana Pummares, 61, who previously worked for the Electricity Generating Authority of Thailand as an engineer. He was reportedly an active red shirt supporter.

Wattana confessed he was behind bombs at Phramongkutklao Hospital in May 22, outside the National Theatre on May 15, and in front of old Government Lottery Office on Rajdamnoen Avenue, as well as several incidents back in 2007.