The Education Ministry began a three-day investigation of a college in Seoul on Monday, following students' sexual harassment claims against all of its male professors in the theatre and visual arts department.

Police are also looking into the sexual misconduct of the former dean of the department at Myongji College, Park Joong-hyeon.

A petition by 37 students from the department revealed that Park had made sexually inappropriate orders to female students, and used violence against male students.

According to the students, Park made female students give him massages in a video editing room behind a partition, where he would then touch them inappropriately. 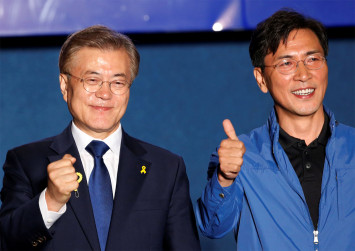 "When a male senior said he would do it (give the massage) instead of female students, the professor refused, saying it should be done by women," a student said.

Students were often beaten and shot with a BB gun he carried around, but they could not say anything because he was the dean and held power in the acting industry, they said.

Park was removed from his post after his alleged misconduct came to light. He has apologised on social media.

Three other professors were also accused of sexually harassing students.

Choi Yong-min, an honorary professor there and actor, apologised for his actions and said he would resign from all his positions, after an actress revealed in an online post last week that she was forced to kiss him in a taxi.

Lee Young-taek, who allegedly forced his students to hug him and made offensive moves, also apologised. An Gwang-ok allegedly made sexually-harassing remarks during classes.

All classes in the department were cancelled on the first day of school Friday, as only two female professors remained.

The Ministry of Education said it would request heavy punishments for abusers if the allegations are found to be true, and hold accountable those found to have whitewashed the incidents.

In a separate case, actor Han Jae-young and the head of the theatre troupe Shinwha Kim Jae-young were also accused of sexually harassing a former female member of the group.

The victim said on Facebook on Sunday that she was sexually harassed several times by Kim. When she talked about the incidents to Han, he made remarks supporting Kim and made inappropriate moves as well.

Han said Monday that he sought forgiveness from the victim, adding that he would reflect on his conduct.