Police suspect some funds are used as rewards to lure teens into joining the unrest.

Officers suspect the funds were used for personal gain and other illegal activities, including participation rewards for young demonstrators.

A police insider said that initial investigations indicated dozens of teenagers were paid thousands of dollars each through fundraising platform Spark Alliance HK to join protests, an allegation a source connected to the group strongly denied.

Acting senior superintendent Chan Wai-kei of the Narcotics Bureau's financial investigation unit said the four, aged between 17 and 50, were arrested during a raid on Thursday.

Officers seized HK$130,000 in cash and a receipt for HK$165,000 spent on supermarket coupons, two laser pointers, six arrows and a large amount of protest gear such as helmets and gas masks.

Spark Alliance, set up after the 2016 Mong Kok riot to help arrested or jailed activists, had crowdfunded about HK$80 million over the past six months.

But police said they had come across suspicious financial transactions, including large amounts spent on personal insurance products.

"We also do not exclude the possibility that the funds were used as a reward to encourage teens to come out and join the civil unrest," Chan said.

The suspects - three men and a woman - were identified as a student, two clerical workers and a human resources manager.

Officers started investigating a shell company behind the crowdfunding effort after finding its financial transactions suspicious.

One of the suspects, a 50-year-old man listed as the director of the company, was the only beneficiary of the personal insurance products bought with the donations.

"Purchasing such products raises suspicions as the group did not say they were collecting funds for investments. The amount is huge as well," Chan said, adding that the shell company had not paid taxes over the past few years.

The remaining three suspects were identified as core members of Spark Alliance, and the amount of money they had used to buy insurance products for the beneficiary did not match their earnings.

"This could involve crimes related to money laundering," Chan said.

He added that the platform had used the funds to pay some arrested protesters, and that anyone who dealt with the possible crime proceeds could be deemed to be involved in money laundering. 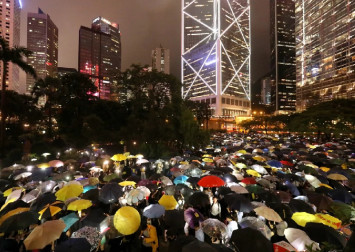 "We condemn the police attempt to use false representation to smear our platform as being involved in evil purposes like money laundering," it said in a Facebook post.

In November, the group announced that HSBC had suspended its account, after the bank found its activities failed to match business purposes as originally stated.

A police investigator with experience in money-laundering cases said people could easily commit an offence if they did not ask about the source of funds, or if they turned a blind eye to the source and dealt with such amounts.

"If one day someone gave you HK$10 million out of the blue and asked you to transfer it into 10 bank accounts, or to buy an insurance product or even protection gear, you could be deemed as laundering money even if you did not ask where it was from," the source said.

"Therefore all banks or money service operators are highly alert and will shut down some accounts as they do not want to get involved."

But veteran criminal defence lawyer Christopher Morley said such arrests on the grounds of money laundering might be a "bit of a stretch".

"If police want to proceed with a prosecution, they would have to establish that the persons being charged had reasonable grounds to believe that they were handling money from crime proceeds," he said.

But he added the arrests might lead to investigations into whether the group was involved in inciting or aiding and abetting criminal activities. 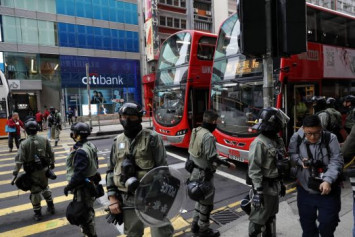 Under the Organised and Serious Crimes Ordinance, those convicted of money-laundering charges face a maximum penalty of 14 years behind bars and a HK$5 million fine.

A 16-year-old frontline protester, who only gave his name as Bosco, accused police of trying to frame Spark Alliance.

"Police are deliberately trying to weaken such platforms so protesters would not be able to receive any help," the high school student said.

A 24-year-old construction worker and hard-core protester, who only identified himself as K, said the platform would not stop because of the police action.

"It is an important platform as even the parents [of protesters] know that they should contact Spark Alliance if their children are arrested," he said. "They would become lost without help from the group."

Spark Alliance is the second-largest crowdfunding platform for the protests, but it has not publicly disclosed its financial statements or amount of donations received.

That fund said it had raised HK$97.1 million as of November 30 and helped 6,946 people while spending HK$23.3 million, mostly for direct economic aid or legal and medical needs involving protesters.