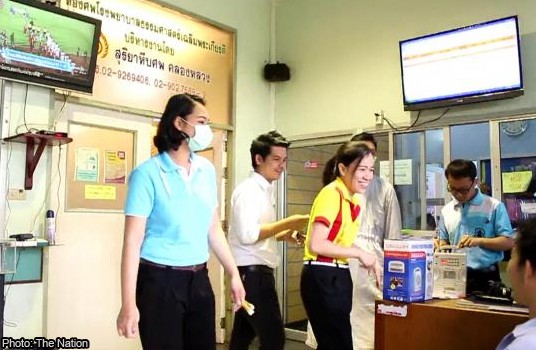 A POSTMORTEM has found that a Chon Buri motorcyclist who was killed on Tuesday while passing a police checkpoint was shot once at a horizontal trajectory in the back of the head, Thai Police spokesman Lt-General Prawut Thawornsiri said yesterday.

A police officer has been charged with his murder and discharged from the service, he said.

The type of bullet used to kill Nares Rojbunsongsri remains a mystery as it exited his head and could not be found at the scene, a checkpoint set up by Nong Dan police in Sri Racha district.

The main wound in Nares's head was nine millimetres in width, said Dr Suranarong Srisuran, who conducted the postmortem examination.

A detailed autopsy will be conducted at the Police General Hospital in Bangkok, with the results expected in five days.

The doctor said that the cause of death was the bullet wound and not Nares hitting his head on the ground, as claimed by the alleged shooter, Sr Sgt-Major Suphan Chamnijin.

Suphan told his superiors that he fired a warning shot vertically into the sky after Nares attempted to ride through the checkpoint when signalled to stop.

It was also alleged yesterday that on Monday night, Suphan rammed a vehicle at an intersection in Bang Saen.

A woman who witnessed the incident claimed her friends were in the sedan when Suphan rammed it with his pickup. They smelled alcohol on his breath but Saen Suk police did not make him undergo a breath test, as required by the law, because their breathalysers were broken.

She said Suphan stayed in his vehicle until a case officer from Saen Suk police arrived and took him to the station.

It was claimed that all the breathalysers were under repair and Suphan did not undergo a breath test, she said.

A friend of Nares said Chon Buri motorcyclists were now happy with the police response to the killing.

He said they would gather today in a peaceful manner in his memory at two locations: Koh Loi in Sri Racha district and outside Police Region 2 headquarters.

Provincial Police Region 2 has taken over the case from Nong Kham police.