PolyU created the initial batch of 800 face shields, but local manufacturers will be responsible for future supplies.

A Hong Kong university is using new technology to spearhead efforts to send thousands of medical face shields to the city's hospital workers as they battle to contain the coronavirus outbreak.

Polytechnic University's 3D printing lab designed and helped produce the transparent coverings, which doctors and nurses can wear to protect themselves against bodily fluids, which could carry infection, lab leaders said on Monday.

Working with local manufacturers, it will deliver 10,000 face shields to the Hospital Authority on Tuesday, with production of up to 30,000 per day predicted by the end of March.

"PolyU is doing technology transfer to the industry, and for industry to help the Hospital Authority and society," said Man Hau-chung, dean of the engineering faculty at the university, who oversees the lab.

"The most important thing is to make it in Hong Kong, and that we can have our own adequate supply."

The face shield consists of a 3D-printed frame, worn against the forehead, which holds a plastic sheet covering the entire face. The single-use shields can be worn over surgical masks, which doctors and nurses already wear.

The Hospital Authority contacted PolyU to help produce the face shields at the beginning of February, according to Alexander Wai Ping-kong, the university's vice-president for research development.

From early morning until midnight in the past two weeks, six technicians have looked after 30 printers which make the frames, as well as attaching the frames to their plastic covers.

The lab designed, tested, and approved the final product in less than a week.

"The face shield is very simple to produce," Wai said.

Despite the fast response, one challenge was to produce the frames even as the design was altered several times according to feedback from doctors who tried them, said Sidney Wong Wing-fai, engineering manager at the printing lab. 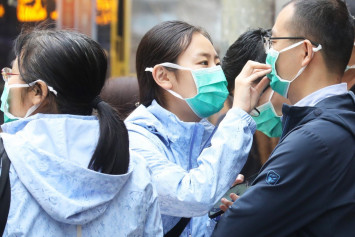 "We have worked with hospitals before to produce equipment for training purposes, but never for something so practical," Wong said.

While PolyU created the initial batch of 800 face shields, local manufacturers would be responsible for future supplies, the university said.

The production comes as Hong Kong faces shortages of critical supplies, including surgical masks, as the coronavirus continues its spread. As of Monday afternoon the city had 79 confirmed cases of the disease known as Covid-19, among whom two had died.

Calvin Au, a Hospital Authority spokesman, said on Tuesday it still had 450,000 face shields in stock, but declined to comment on how much they would cost the government.

The authority had estimated in early February that only one month's supply of face masks remained for its medical workers.