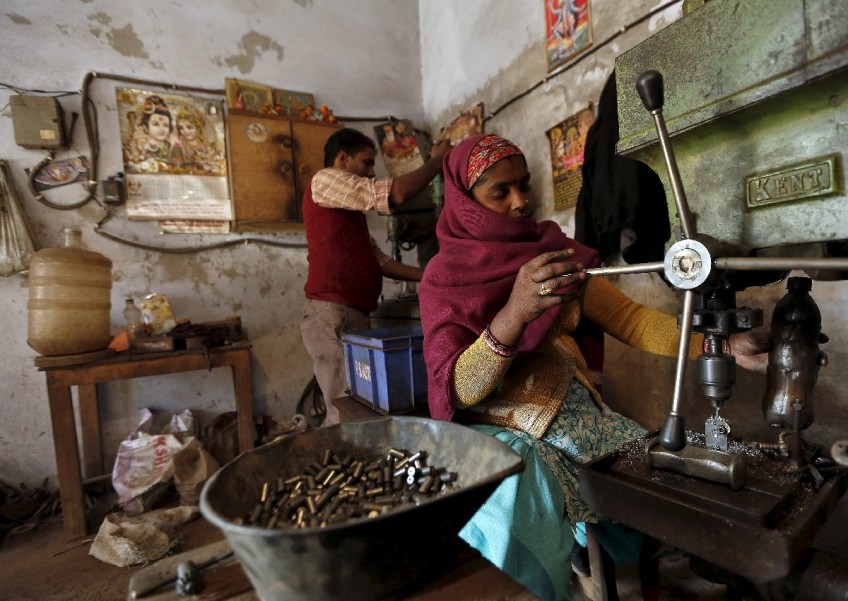 FARIDABAD, India - In a dingy factory in the sprawling industrial hub of Manesar in northern India, a plastic moulding machine malfunctioned, mangling Visheshwar Prasad Singh's right hand as he made parts for a supplier to the country's major automakers.

Singh was one of thousands of poor labourers, many temporary, who toil for 12 hours a day making auto parts for as little as US$3-a-day (S$4.29) to feed India's cheap car boom. "I had no training to use the machine and was asked to operate it one day," said the 51-year-old, who made parts for Ranee Polymers, supplying to Honda Motor Co and Yamaha Motor Co.

Doctors reattached his hand, but after 14 months and three operations it remains near-paralysed.

The plant manager at Ranee Polymers said the company did not allow workers to operate machines without proper training. There were only one to two accidents a year at the plant, which employs 250 people, R.K. Rana said.

Honda Cars India, which sources from Ranee, was not aware of the accident as it did not occur when making parts for the company, a spokeswoman said, adding that audits of incidents impacting safety or supplies were conducted.

Honda Motorcycle and Scooter India said a spokesman was not available to comment. India Yamaha Motor did not respond.

Car makers such as Maruti Suzuki India and Hyundai Motor see huge growth in India, set to become the world's third-largest auto market by 2020 as millions buy their first new car. Price tags can be as low as US$3,000 for a new Tata Motors Nano mini-car.

India is also becoming a low-cost export hub for global car makers such as General Motors and Ford Motor.

Consultant McKinsey estimates India's auto parts sector will grow five-fold to about $200 billion by 2026, with exports rising to US$80 billion from US$11 billion.

As the sector expands, some of the work is sub-contracted out to small factories operating on paper-thin margins, where poor contract workers often have little or no access to safety equipment or health benefits, industry experts say. "Undoubtedly, the workforce of suppliers, especially at the bottom of the chain, are paying for the growth in the auto industry," said Puneet Gupta, associate director at consultant IHS Automotive. But with more focus on quality and with India becoming an export hub working conditions would improve, he added.

Car makers say they conduct audits at their main suppliers, but it is not possible to check all the smaller companies that may be outsourced work.

A Maruti spokesman said the company conducts safety and quality audits at its 400 direct suppliers and shares best shopfloor practices, including those related to safety and working conditions.

Ford India and Hyundai, which manufacture cars in the southern state of Tamil Nadu, far from the Manesar hub, did not respond to an email seeking comment.

A report by non-profit organisations Agrasar and Safe in India on safeguarding workers in the auto hub of Gurgaon and Manesar, outside Delhi, said most accidents occurred due to lack of training and safety inspections and poor machine maintenance.

The region - some 50 km (31 miles) south of the capital and home to top car maker Maruti Suzuki along with hundreds of small factories - employs 80,000 workers, but there are only about 35 to 40 inspectors in total to monitor all industries in the area.

A senior official in the state labour department said inspections happened once a year, or when a worker reported an accident - the leading cause of which was violations of safety rules such as having sensors or guards on machines, he said.

Every year, more than 1,000 workers in the auto hub, most below 23 years of age, are injured seriously and lose their livelihoods, the report said. "Factory owners train people for a day or two and get them to operate machines. It is all about meeting targets," said Prerit Rana, founder of Agrasar, that helps rehabilitate injured workers.

The village of Mujesar in Faridabad, south of Delhi, is a labyrinth of auto part workshops, many operating in residential areas where most manufacturing is banned.

In one of the hole-in-the-wall workshops, made up of two small rooms with a window the size of a computer screen for ventilation, Reet Lal coats metal parts with anti-rust chemicals, earning him 8,500 rupees (US$125) a month.

With a glove only in one hand and no mask, Lal endures nauseating smells for 12 hours a day to complete work outsourced by a firm whose website says it makes parts for Maruti, Tata Motors and GM.

A Tata Motors spokeswoman said it no longer sources from the supplier due to poor quality of products. GM India said it did not source parts from that supplier.

Kamala, a 30-year-old worker at another small workshop in Faridabad, spends hours on a wooden stool labouring over a rusted drilling machine. "My life is hell," said Kamala, a mother-of-two who spends part of about US$2.50 she earns a day to treat chronic backache."I hope my children don't have to go through the same."