Nakhon Pathom, Thailand - From the courtyard of a Catholic girls' school outside Bangkok, Sister Ana Rosa Sivori is eagerly awaiting a visit to the region from her second cousin - Pope Francis.

Six years his junior, the sprightly 75-year-old nun has watched from abroad as her cousin transforms from the "shy" kid she grew up with in Buenos Aires to a global figurehead, unafraid to speak his mind and wade into treacherous political waters.

That boldness will be tested next week when the pontiff visits first Myanmar and then Bangladesh - countries reeling from a Rohingya refugee exodus sparked by ethnic and religious hatreds.

While the pontiff will not have time for a face-to-face reunion, Sister Ana Rosa will be closely watching her pen pal from her home in Thailand, where she first arrived as a Salesian missionary more than 50 years ago.

"He is coming for the Myanmar people, not for us," the fluent Thai-speaker said from the schoolyard in Nakhon Pathom, where pupils buzz around her white robes and playfully grab onto her cross as she passes through the lunch area.

"It is the right time for him to come to Asia. These two places, Myanmar and Bangladesh, they are in conflict....he sees the need to encourage people, to build a bridge of peace." The cousins, whose grandfathers were brothers, have not seen each other in three years but exchange letters funnelled through the Vatican Embassy in Bangkok.

"I keep everything," Sister Ana Rosa said as she pulled out an envelope of notes from the pontiff - written in tight, miniscule black script and signed with a simple "Francisco".

As for the political sensitivities hanging over his Myanmar trip, the nun says her cousin is "not afraid at all".

The Pope has been outspoken about his sympathy for the Muslim Rohingya - a stance that could trigger protests in mainly Buddhist Myanmar where the minority is vilified.

"He is not afraid of saying 'you should look after these people'," she told AFP, saying she expected him to talk tough with Myanmar's government leaders over their treatment of the persecuted Muslim minority.

As for his interlocutors: "They cannot be the same after meeting him."

That wasn't always the case.

She chuckles as she recalls Francis, born Jorge Mario Bergoglio, as a younger priest who didn't always have such a silver tongue. 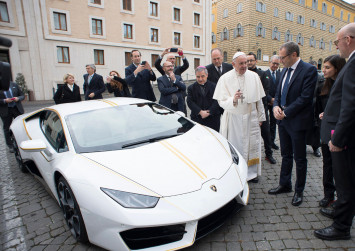 Sister Ana Rosa now turns to his sermons as a source of solace, tracking his every move across the world stage.

"His words are really profound, and practical." Francis' trademark smile is also a new development, she explains.

"He was very shy person, reserved. He didn't smile before. Now he smiles a lot. He likes to be with people." The other nuns at her school often grab onto Sister Ana Rosa's wrists, just to feel closer His Eminence.

But she says it is still strange to see Francis as anything other than her big cousin.

Their last chat in the Vatican several years ago was friendly and familiar, she said, spanning family affairs and their shared line of work.

"I thought to myself - I'm talking to the pope?" she said with a hearty laugh.