Prayut 'qualified' to run for PM

Ombudsman's ruling is questioned by many, who says that it is actually the Election Commission (EC)'s job to decide.

The office of the Ombudsman drew on a previous charter court ruling to pronounce junta chief General Prayut Chan-o-cha fit to run for prime minister, overruling questions raised over his incumbency.

In response to a complaint lodged by social activist Srisuwan Janya, the Ombudsman explained yesterday that the general does not fit the description of a state servant as laid out in a previous Constitutional Court ruling.

The previous judgement described state servants as being either appointed or elected, working full-time with the authorities under the law, being under the supervision of the government and receiving money in return for their services.

Raksagecha Chaechai, the Ombudsman's secretary-general, said yesterday that Prayut only met two of the four criteria - he worked full-time for the authorities under the law and was paid for his job.

He said Prayut could not be considered a state servant because he had been appointed by the King outside the law, and that his appointment was the product of a temporary power seizure.

Hence, the Election Commission (EC)'s endorsement of Prayut's nomination as PM candidate was not unlawful and the case does not have to be submitted to the Constitutional court, the Ombudsman concluded. 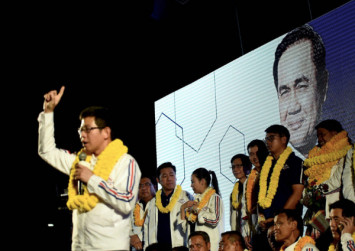 Srisuwan had lodged a petition with the Ombudsman last week, because he said the process would be faster and also because he did not trust the EC. Others have filed similar complaints against Prayut with the EC, and the commission's president, Ittiporn Boonpracong, has said a decision may be announced this week.

However, according to pro-bono lawyer Winyat Chartmontri, it is not the Ombudsman's responsibility to judge this case and its conclusion will only cause further confusion.

He said this case must be ruled upon by the EC and submitted to the Constitutional Court, adding the Ombudsman only had the job of reviewing the constitutionality of legislation.

The lawyer also slammed the EC for slow progress in the case, and suggested that the commissioners should quit their office if they preferred the Ombudsman to do their job.

Khunying Sudarat Keyuraphan, a core leader of the Pheu Thai Party, also voiced dissatisfaction over the Ombudsman's conclusion in favour of Prayut yesterday.

She asked that if Prayut were not a state servant, how was he able to exercise absolute power under Article 44.

"If they make decisions like this, then we don't need any principles or even the elections," Sudarat said. "They don't care how judgements like this go against the public sentiment. They only care about staying in power."

Sudarat said she was now placing her hopes on the EC to see if the agency would let the country go to wrack and ruin.

Meanwhile, the Future Forward Party was cleared of dissolution threats yesterday after the EC decided that the "false" information about its leader was not enough evidence to show the party was breaking the law.

Srisuwan had lodged a complaint asking for the party to be dissolved after its website displayed false information that Future Forward Party leader Thanathorn Juangroongruangkit had been president of the Federation of Thai Industries for two terms.

The EC dismissed this case saying there was not enough evidence to prove the party was trying to dishonestly attract votes.

However, the activist filed a new complaint yesterday, accusing Future Forward of being influenced by outsiders after members of the now-defunct Thai Raksa Chart Party stepped in to help them campaign for votes. These Thai Raksa Chart Party members may also be in trouble again and the EC has set up a panel to look into the issue.

Deputy Prime Minister Wissanu Krea-ngam, a legal expert, said yesterday that he was not sure if providing support to Future Forward was lawful, though it was up to the EC to decide.

However, he confirmed that some Thai Raksa Chart members had broken the law by urging voters in some areas to choose the "no" option in their ballot papers.

"They cannot tell voters to not vote for this or that person," he said. "It's unlawful, but it's a petty offence with a small punishment."