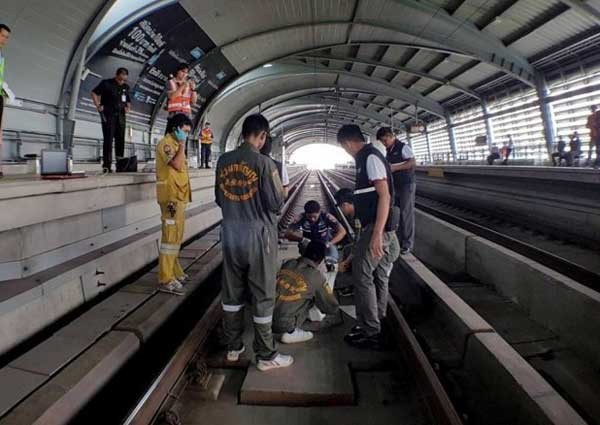 Invesrigators are attempting to unravel the circumstances surrounding the death of a six-month-pregnant woman who was hit by an Airport Rail Link train at the Ban Thap Chang station yesterday.

Rosarin Plianlar was killed when she dropped onto the track shortly before 7am.

"My wife had severe morning sickness. Often, she felt dizzy and felt faint," her husband Piyapong Rorbkorb was quoted by police as saying.

CCTV footage at the station showed Rosarin was in front of a row of waiting passengers when a train was about to arrive.

She was initially behind the yellow line at the platform but then it looked like she moved a few steps forward and dropped into the track.

It was unclear whether she fainted and fell on to the tracks.

Wisut said the train was only about 50 metres away when Rosarin fell on to the tracks.

The driver pressed the emergency brake button, but did not have enough distance to stop the train in time.

The system requires about 100m for a train to be brought to a halt in an emergency, he said.

At present, however, these doors are available only at Suvarnabhumi Airport Station.

Wisut said his company would provide funeral assistance to the Rosarin's family.

The company's vice president Suthep Phanpeng said the money was on top of any compensation awarded by an insurance firm.

"The compensation can be up to Bt400,000 based on the insurance policy we have taken out. But the amount will depend on the result of the investigation," he said.

At this point, suicide has not been ruled out.

Piyapong reportedly saw Rosarin off at the Airport Rail Link station almost every day before he headed to his office.

He also saw her off yesterday morning before the incident.

Pol Captain Preecha Boon-aree, a deputy inspector at Makkasan railway police station, said Piyapong rushed back to Ban Thap Chang station when he was unable to contact his wife via LINE chat application after he heard about the incident.