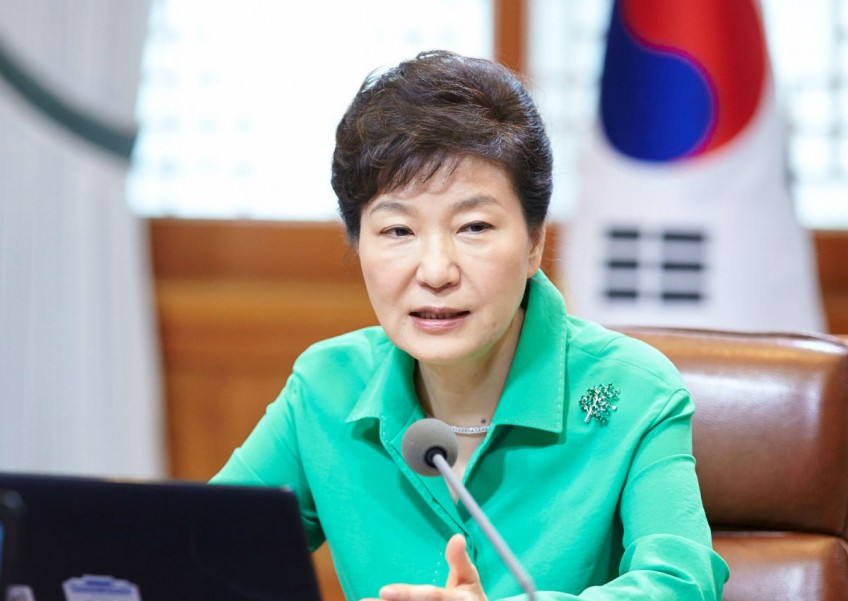 President Park Geun-hye told the leaders of economically advanced countries Sunday that South Korea would invest in North Korea's infrastructure together with the international community if Pyongyang were to abandon its nuclear ambitions.

Speaking at the first session of the G20 summit held in Turkey, the South Korean leader was suggesting a joint investment project for the reclusive regime and other parts of Northeast Asia that have substantial growth potential as well as high demand for infrastructure building.

"If North Korea abandons the nuclear (weapons) and takes a path toward openness and co-operation, (South Korea) will join hands with the international community to assist in infrastructure investment in Northeast Asia where annual demand is expected to be US$63 billion (S$89.6 billion) a year," said Park at the summit held in the resort city of Antalya.

For this, the president offered to launch a multinational development bank to finance infrastructure works in Northeast Asia.

"It will be good if we could establish a development bank specialising in Northeast Asia and co-operate with ADB, which oversaw Asia's development for a long time, as well as the AIIB," she said, referring to the Asia Development Bank. The ADB was conceived in 1966 for postwar rehabilitation in Asia and the Pacific, and the Asian Infrastructure Investment Bank has been proposed by China as a new international financial institution for infrastructure construction in the Asia-Pacific region.

Park's top economic aide told reporters later the proposal was offered on the premise of Pyongyang discarding its nuclear weapons under development for deterrence against what it calls Washington's hostile policy.

The remark came a few days after Park expressed her hopes for an inter-Korean summit.

Before she left for a 10-day tour for three separate regional meetings on Saturday, Park said that she has "no reasons not to hold a summit" with the North.

At the meeting with leaders of the 20 advanced countries, Park sat next to Japanese Prime Minister Shinzo Abe during the sessions, where they exchanged pleasantries after their first-ever summit in Seoul earlier this month.

According to Kyodo news agency, Abe told Park that there has been a good atmosphere in Japan over bilateral ties since their summit in Seoul. Park told Abe that she was glad to hear that, the Japanese media said, quoting Japan's Deputy Chief Cabinet Secretary Hiroshige Seko.

Kim Kyou-hyun, senior presidential secretary for foreign affairs, later confirmed that Park and Abe had a chat, but they didn't talk about the issue of former sex slaves, he said. In the previous meeting, Park and Abe agreed to speed up the negotiations this year on Korean women forced into sexual slavery by the Japanese military during World War II, without setting a specific deadline.

Korea wants a proper apology from Japan and compensation for sex slaves, while Tokyo claims the issues have been settled in 1965 when the two normalised their diplomatic ties.

On the sidelines of the G20 meeting, Park also held a bilateral meeting with British Prime Minister David Cameron and offered condolences for the British citizens who died in the Nov. 13 Paris terror attacks.

The two leaders also agreed to co-operate in peacekeeping operations in Africa and to expand ties to end the Ebola outbreak in Sierra Leone.

South Korea completed its Ebola relief mission in the West African nation earlier this year. The mission was the first case of the South Korean government sending an emergency relief team overseas to fight the epidemic outbreak.