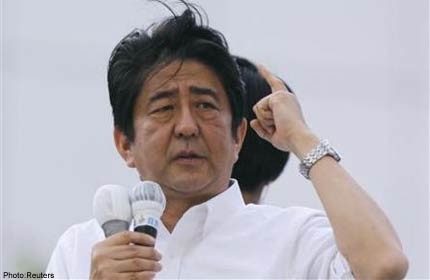 TOKYO - Prime Minister Shinzo Abe's ruling bloc won a decisive victory in an upper house election on Sunday, cementing his grip on power and setting the stage for Japan's first stable government since the charismatic Junichiro Koizumi left office in 2006.

The victory gives the hawkish leader a stronger mandate for his "Abenomics" recipe to revive the economy and spells his personal political redemption after he led his Liberal Democratic Party (LDP) to a humiliating defeat in a 2007 upper house election.

The ensuing parliamentary deadlock allowed the opposition to block legislation and led to Abe's resignation two months later. That "twisted parliament" has hampered policies for most of the six years since and led to a string of revolving-door leaders.

"'Abenomics' is proceeding smoothly and people want us to ensure the benefits reach them too. That feeling was strong."

Abe, 58, who returned to power after a big win in December's lower house poll for his LDP and coalition partner New Komeito, has said he will remain focused on fixing the economy with his "Abenomics" mix of hyper-easy monetary policy, fiscal spending and structural reforms.

But some worry that Abe's resolve for economic reform could weaken in the face of a resurgent LDP. A landslide victory could bolster opposition to regulatory reform from LDP lawmakers with close ties to industries that would suffer from change.

Critics also worry Abe will shift focus to the conservative agenda that has long been central to his ideology, and concentrate on revising the post-war pacifist constitution and recasting Tokyo's wartime history with a less apologetic tone.

Such a shift, along with moves to strengthen Japan's defence posture, would further fray ties with China and South Korea, where bitter memories of Japan's past militarism run deep. Tokyo is already engaged in tense territorial rows with Beijing and Seoul over tiny, uninhabited islands.

"I have the impression that Prime Minister Abe wants to revise the constitution, though I don't think it will be easy," said apparel firm employee Etsuko Yamada, 35, who voted for the opposition Japanese Communist Party.

"I want him to show Japan's presence through diplomacy with strong negotiating power, not though military power by spending money to rearm."

Abe has declined to say whether as premier he will visit Tokyo's Yasukuni Shrine for war dead, where Japanese leaders convicted by an Allied tribunal as war criminals are also honoured. A visit on the August 15 anniversary of Japan's defeat in World War Two would spark outrage in the region.

A Reuters poll showed Japanese firms generally wanted the LDP to win the election but they worry a landslide victory would allow Abe to prioritize nationalist policies over the economy, as critics say he did during his troubled 2006-2007 term.

Final results will be known late on Sunday or early on Monday.

Media exit polls showed the LDP and New Komeito would win more than 70 of the 121 seats up for grabs in the 242-seat upper house.

With the coalition's uncontested 59 seats, that hands it a hefty majority, solidifying Abe's grip on power and raising the chances of a long-term Japanese leader for the first time since the reformist Koizumi's rare five-year term ended in 2006.

No election for either house of parliament need be held until 2016.

The exit polls showed, however, that the LDP fell short of winning an upper house majority in its own right for the first time since 1989, although it could put in a better performance than in 2001, when the party was led by the popular Koizumi, broadcaster NHK said.

The LDP and two smaller parties that back Abe's drive to revise Japan's pacifist constitution to legitimize the military looked to fall short of the two-thirds majority needed to take revisions of the charter to a public referendum, the exit polls showed. Those parties have two-thirds of the lower house seats.

Despite the LDP-led bloc's win, the party's pro-nuclear power stance is unpopular, and plans to restart reactors that have been off-line since the March 2011 Fukushima nuclear disaster could run into trouble.

Abe will also have to decide whether to go ahead with an increase in a 5 per cent sales tax to 8 per cent next April, the first stage in a planned doubling of the levy to rein in Japan's massive public debt.

The main opposition Democratic Party of Japan, which surged to power in 2009 to end more than half a century of almost non-stop LDP rule only to be ousted last year, suffered its biggest drubbing since its founding in 1998. Exits polls showed the party winning 21 or fewer seats.

The result raises concern about prospects for a competitive two-party democracy.

Many anti-LDP voters, faced with a fragmented opposition, cast their ballots for the Japanese Communist Party to vent their frustration.