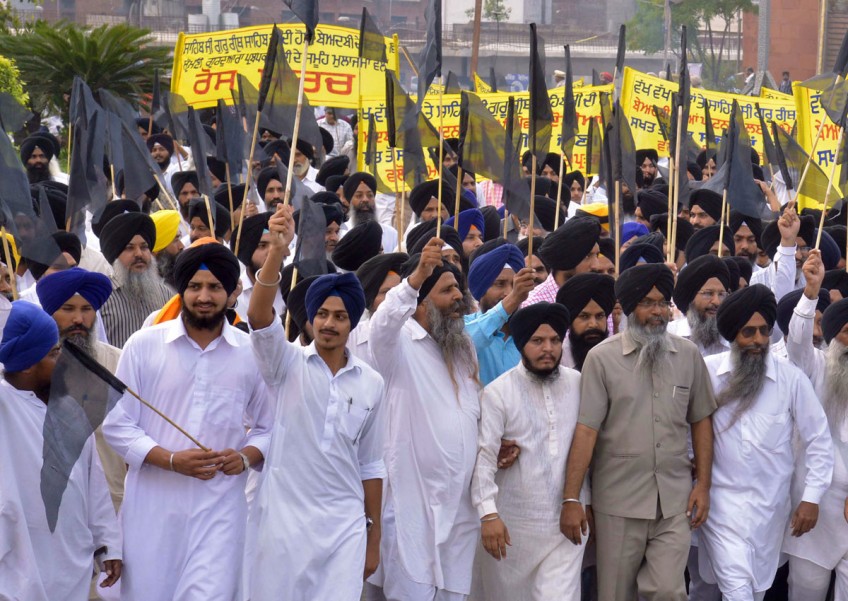 The Indian state of Punjab remained tense yesterday as hundreds of protesters blocked major highways and roads, cutting off access to several cities for hours amid unrest over the desecration of the Guru Granth Sahib, the holy book of the Sikhs, and the deaths of two protesters last week.

Indian paramilitary forces, deployed on Tuesday, fanned out across the state.

The two people died when police opened fire during the first wave of protests last Wednesday, after torn pages of the book were found in the village of Bargari last Monday. More torn pages have since been found in six other locations in Punjab.

Six people have so far been arrested for the separate incidents as the police maintained there was an attempt from outside India to create unrest and disturb communal harmony in Punjab, which in the 1980s and 1990s saw a deadly Sikh separatist insurgency.

The police said two brothers, arrested on Tuesday for the first incident in Bargari, had links to someone in Australia. Police also claimed the duo were in contact with someone in Dubai and were promised money, but did not elaborate.

The northern state of Punjab is an agrarian state that is known as the wheat bowl of the country, responsible for 18 per cent of India's wheat production.

It used to be one of India's high-growth states but years of misrule and mismanagement had seen GDP growth rates fall to almost 6 per cent last year, whereas top states enjoy 11 per cent. There is also increasing unemployment and a deepening drug problem.

Before the protests over the desecration of the holy book, thousands of farmers staged protests earlier this month to seek higher compensation from the government after an epidemic wiped out their crops.

Different groups and people within India and outside urged harmony.

The Central Sikh Gurdwara Board in Singapore said in a statement that it was "deeply saddened over the situation in Punjab".

"These acts have hurt the feelings of Sikhs in Singapore. We pray that no further acts of sacrilege on Sri Guru Granth Sahib Ji occur," said the board, urging "all Sikhs in Singapore to do their personal prayers for peace and harmony to prevail".

The unrest in Punjab triggers concern in security and intelligence circles, particularly as there are still elements that want to revive the struggle for independence even though mass support has long dissipated.

At the height of the insurgency, Indian security forces in 1984 stormed the Golden Temple - the most important religious site for Sikhs - in the city of Amritsar and killed Sikh militants.

Four months later, former prime minister Indira Gandhi was assassinated by her Sikh bodyguards in revenge over the decision. Insurgency was wiped out in the 1990s following concerted police action.

"There is a danger of disruption and political instability but no danger of resumption of terrorism," said Mr Ajai Sahni, executive director of the Institute for Conflict Management in New Delhi.

"There is extreme dissatisfaction with the state of governance and the state of the economy. Even after 13 to 14 years of terrorism, Punjab was No. 2 in per capita income. Last year, it was 14."

The public demonstrations are "a new avenue to articulate the more generalised state of frustration in Punjab", he added.