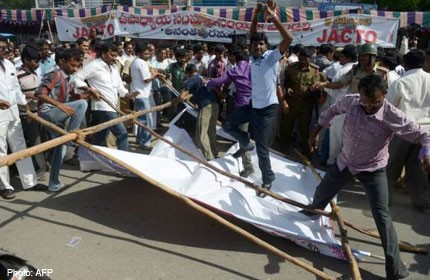 Indian supporters of united Andhra Pradesh shout slogans as they pull down the hoardings of Congress party during a protest against the formation of Telangana state.

ANANTHAPURAM, India - Protests erupted Wednesday in southeast India a day after the government bowed to a long-standing and often violent campaign for a new state called Telangana.

Demonstrators blocked roads and took to the streets in coastal regions of the state of Andhra Pradesh after the decision by the cabinet of Prime Minister Manmohan Singh to split the region into two.

A new state called Telangana, which will be India's 29th as long as it gets parliamentary approval, will be created out of an impoverished, drought-prone area that supporters say has been neglected by successive state governments.

The main city of the region, IT hub Hyderabad, will serve as joint capital for both areas for at least the next 10 years, the government said.

In Ananthapuram district, 400 kilometres (250 miles) from Hyderabad, protesters shouted slogans and tore down posters of the ruling Congress party amid fears of more violence, which has regularly flared in recent years over the issue.

India last redrew its internal boundaries in 2000, with the creation of three new states in economically deprived areas in the northern half of the country.

Critics say Thursday's step could open a "Pandora's box" of demands for statehood by other regional groups in ethnically diverse India, which also has a host of separatist movements.