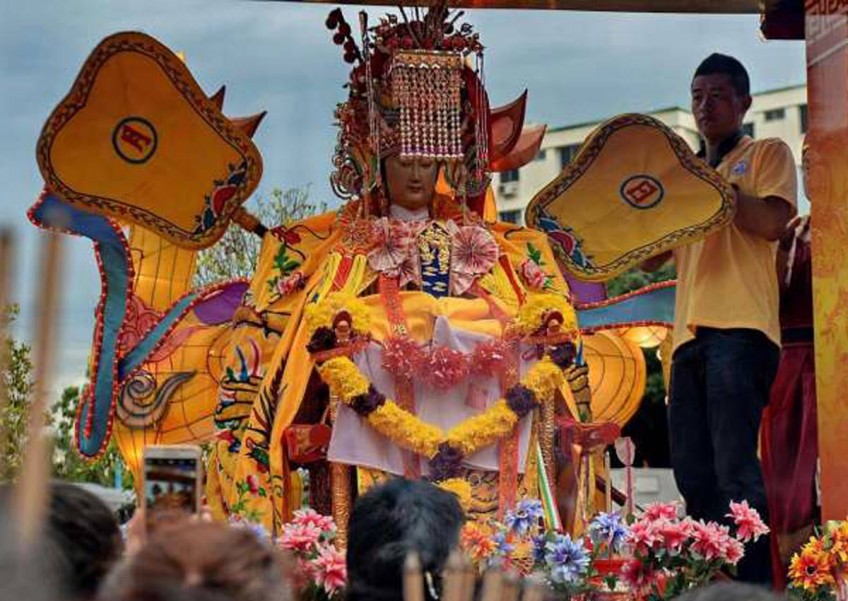 Devotees make an offering with joss sticks to the idol of Chinese sea goddess Mazu at a temple in Singapore on July 5, 2017 during its tour to the region.
The Straits Times

FUZHOU - A golden statue of the Chinese sea goddess Matsu travelled on a ferry Saturday from Meizhou in eastern China's Fujian province to Taiwan for a mass blessing tour.

A festival parade featuring band music with traditional Chinese drums and trumpets was held to escort the statue from its home temple in Putian to a port on Meizhou Island for the 17-day tour.

Matsu is widely worshipped in Taiwan and other coastal regions of southern China, and her believers are also found in eastern and southeast Asian countries.

The statue will make a blessing visit to 89 Matsu temples in 10 cities and counties in Taiwan, where worshiping and blessing rituals will be held for an estimated 1 million worshippers and visitors.

This year marks the 20th anniversary of the statue's visit to Taiwan. In 1997, the statue's blessing tour was a sensation in Taiwan, recording 10 million pilgrims during visits to 35 temples in 19 cities and counties, making it the most popular cross-Straits activity.

This year's blessing tour was sponsored by a number of Taiwanese companies, including Hon Hai Precision Industry, an electronic manufacturer and major supplier for Apple's iPhone.