PyeongChang 2018 kicks off, aiming for peace, sports and culture

The opening ceremony for the 2018 PyeongChang Winter Games was held Friday, kicking off a sports festival that brings together athletes, delegates, spectators and media outlets from all around the globe.

Until Feb. 25, PyeongChang, Gangneung and Jeongseon in Gangwon Province will host the leading athletes in winter sports.

Under the theme of "Peace in Motion," the opening ceremony held at the Olympic Plaza in Daegwallyeong-myeon was a fanfare for the festivities to take place over the next two weeks.

Thousands of fans flocked to the tiny town of Daegwallyeong hours before the ceremony, and then entered the PyeongChang Olympic Stadium around 4 p.m. A total of 3,000 people were part of the six-part performances at the ceremony directed by Song Seung-hwan. 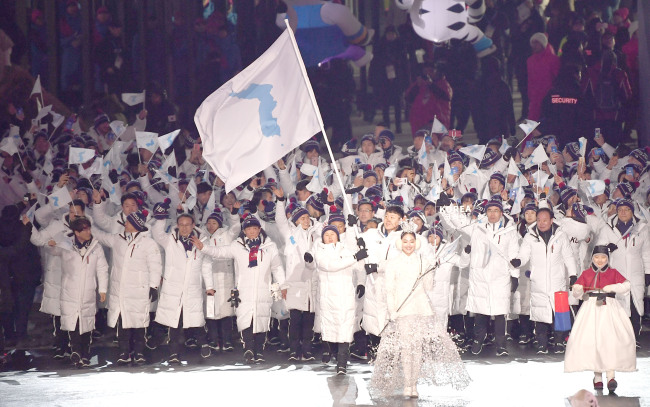 Athletes from South Korea and North Korea bearing the Unified Korea enter the PyeongChang Olympic Plaza during the 2018 Winter Olympic Games’ Opening Ceremony on Friday. It’s the first time in 12 years that the two Koreas are marching as one at an Olympics event.Photo: The Korea Herald/Asia News Network

Before the ceremony, the audience was treated to a taekwondo demonstration by a North Korean team. Passionate supporters from the North chanted "We are together!" and "Cheer up!" without stopping as the taekwondo masters showed off their skills.

Despite the enthusiastic crowd, there were a considerable number of empty seats. One section seemed almost empty even as the ceremony went on.

A countdown at 8 p.m. heralded the beginning of the ceremony, followed by a performance titled "The Land of Peace." The performance was about five children from Gangwon Province travelling in time in a quest for peace. The white tiger -- the same species as the mascot of the games Soohorang -- had the role of guiding the children.

President Moon Jae-in and IOC chief Thomas Bach were introduced to the public, followed by the second part of the performance, "Taegeuk: Harmony of the Cosmos." This depicted the harmony of yin and yang symbolized by the Taegeuk shape on Korea's national flag, the Taegeukgi.

The Taegeukgi was hoisted to the national anthem sung by the Rainbow Children's Choir.

Afterward, the participating athletes paraded into the arena to hit songs by South Korean artists, such as Psy's "Gangnam Style." The national team of Greece, the birthplace of the Olympics, led the way.

But the highlight of the event was when South and North Korean teams marched in together to the song "Arirang." South Korean bobsleigh pilot Won Yun-jong, and North Korean women's hockey player Hwang Chung-gum carried the Korean Unification Flag, a symbol of a unified Korea.

President Moon Jae-in, International Olympic Committee President Thomas Bach and members of the North Korean delegation were among those who gave a standing ovation to the Korean team.

Then it was time for a performance depicting the two pillars of Korea today: tradition and cutting-edge technology. "Arirang: The River of Time" featured the Jeongseon Arirang's sad and joyous tunes played to the five children sailing on a raft, rocking to and fro to symbolize the tumultuous history of Korea.

In the "All for the Future" section, the five children have grown up to become leaders of the ICT world of the future. The gate opens to show a world where all things, people, time and space are interconnected with communication with everything.

After the time travel, the five children stood before the people of the world with a candle for peace. They then released doves into the skies above PyeongChang to symbolize the dominating message of the Olympics: peace.

Lee Hee-beom, president of the PyeongChang organising committee, stressed that the Winter Games would be above all the Olympics of peace.

"We've just watched athletes of the two Koreas walk in together holding the Korean Unification Flag. … The PyeongChang Olympics will be a beacon of hope for those around the world yearning for peace," he said.

IOC President Bach said the joint march by the two Koreas represents an example of the unifying power of the Olympics.

"Dear athletes, now it's your turn. This will be the competition of your life. You will inspire us all to live together in peace and harmony despite all the differences we have. You will inspire us by competing for the highest honour in the Olympic spirit of excellence, respect and fair play," he said.

President Moon then officially declared the opening of the PyeongChang Winter Games.

From the very beginning, South Korean authorities have sought to make peace the theme of games, epitomized by its effort to invite North Korea to the Olympics.

Prominent figures from in and out of country attended the ceremony - including US Vice President Mike Pence, Japanese Prime Minister Shinzo Abe and Lotte Group Chairman Shin Dong-bin - but one participant who caught the attention of everyone was Kim Yo-jong, the influential sister of North Korean leader Kim Jong-un. She is leading the North Korean delegation with Ri Sun-kwon, head of the Committee for the Peaceful Reunification of the Country of the DPRK (North Korea's official name).

The North's last-minute decision to take part was one of the biggest and most controversial matters for the PyeongChang Olympics. While some applauded the effort to ease inter-Korea tensions, others raised concerns that Pyongyang may get a chance to promote its dictatorial regime at Seoul's expense. Another figure that stood out at the scene was Fred Warmbier, the father of Otto Warmbier. The junior Warmbier was an American student who was jailed in North Korea and died last year upon his return to the US. Warmbier accompanied Pence earlier in the day during his visit to meet North Korean defectors, where the US vice president stressed the importance of shedding light on North Korea's repressive regime.

As apparent from the theme of the opening ceremony, Seoul has expressed hopes that the PyeongChang Games will be one of peace. Prior to the events, security issues crept up, as the venues are a mere 80 kilometers away from the inter-Korean border.

As the 1950-1953 Korean War ended in an armistice, the two Koreas technically remain at war. However, the North's decision to participate in the games has had a considerable effect on relieving security concerns.

Thomas Bach, the International Olympic Committee chief who previously said that there never has been "Plan B" even under nuclear tensions, said earlier this week that the PyeongChang Winter Games have brought "real hope."

"The 2018 Olympic Winter Games in PyeongChang have allowed another new beginning on the Korean Peninsula. … They have opened the door for a peaceful dialogue between the Republic of Korea and the Democratic People's Republic of Korea," he said at the opening ceremony for this week's International Olympic Committee session.

But the Moon Jae-in government's attempt to bring in the North amid the festivities has also sparked criticism locally, particularly its decision to create a joint team of the two Koreas in women's ice hockey. Adding fuel to the fire was the fact that it was decided less than a month before the Games began.

While the decision was controversial, it marks the first time in history that the two Koreas are teaming up to create a unified team at the Olympics, an attempt which has been on-going since the 1960s.

In 1988, when Korea hosted its first Summer Olympics in Seoul, the two Koreas met four times in three years leading up to the games, but failed to reach an agreement. 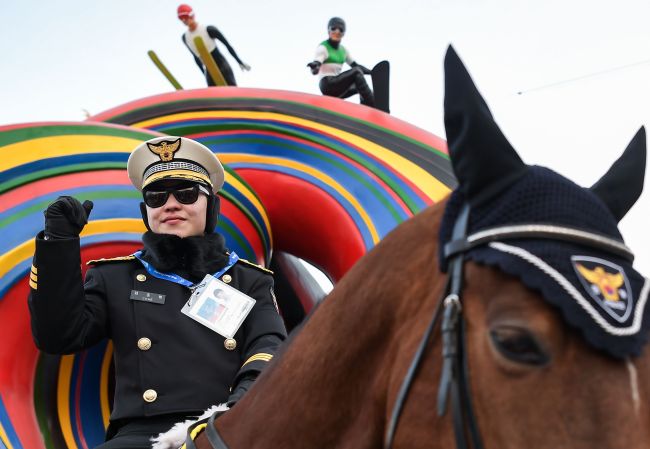 A picture taken on February 9, 2018 shows a mounted Korean police officer posing outside the Pyeongchang Stadium ahead of the opening ceremony of the Pyeongchang 2018 Winter Olympic Games. Photo: AFP

Having hosted the Summer Games, World Championships and the World Cup, South Korea has long been looking to complete what it calls "the sports grand slam" by also hosting the Winter Games to host all four major sports events.

After coming up short in 2003 and 2007, the host city of PyeongChang finally came to bring the Winter Games to Gangwon in the 2011 vote. Since the country first participated in the Winter Games in 1948 - exactly 70 years ago - Seoul has grown considerably in its prowess, with superstars like Kim Yu-na becoming one of the most dominant figure skaters of all time.

As a testament to how far it has come, South Korea reaped six gold, six silver and two bronze medals in the 2010 Vancouver Winter Games, the best track record so far. The country seeks to surpass that with eight gold, four silver and eight bronze, which is expected to sit South Koreans at No. 4 overall.

A total of 102 gold medals are to be awarded at the games, four more than the 2014 Winter Games in Sochi, and the largest number to date.

The PyeongChang Games are also the largest in terms of participating athletes and countries at 2,925 and 92, respectively.

The US sent the largest group of athletes, with 242 players.

South Korea is sending 144 athletes to PyeongChang, which by far outnumbers the previous athletes' delegations in Vancouver - 46 - or Sochi - 71.

Six countries - Ecuador, Malaysia, Singapore, Eritrea, Kosovo and Nigeria - are to participate in the Winter Games for the first time at PyeongChang,

In addition to the games, PyeongChang seeks to be a "Culture Olympics" as well," with a total of 1,900 culture-related programs taking place during the games in Gangwon Province.