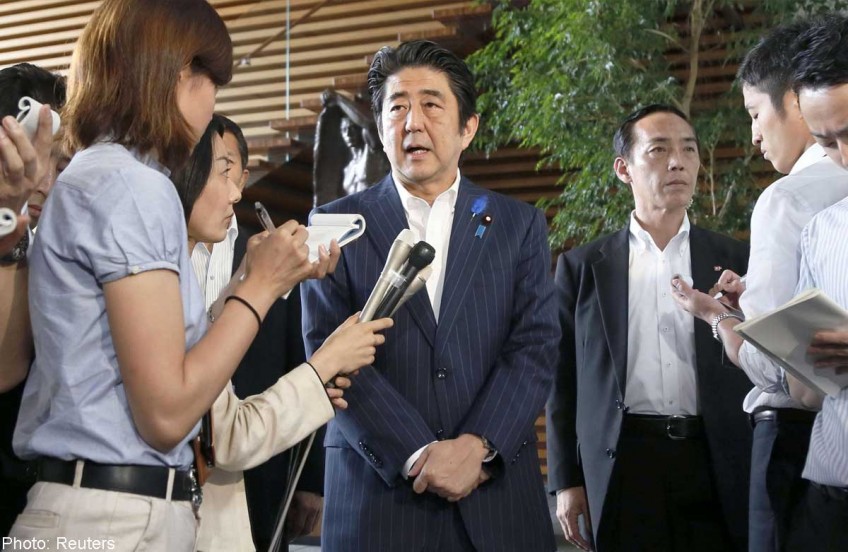 TOKYO - As Japan presses North Korea for information on the fate of Japanese citizens abducted decades ago, speculation is simmering that Prime Minister Shinzo Abe could use a possible breakthrough on the emotive issue to call a snap election.

History shows that securing the release of Japanese nationals kidnapped by North Korea decades ago can deliver a hefty, if shortlived, boost to a premier's popularity.

North Korea agreed in May to reopen an investigation into the fate of missing Japanese, including those snatched by its agents to train spies in the 1970s and 1980s, in return for Japan easing some economic sanctions on the reclusive state.

An initial report is due in late summer or early autumn, though cynics believe North Korea already knows the whereabouts of the missing Japanese. "Toward a snap election in September" blared a speculative headline this week in the weekly tabloid Shukan Gendai. "Certain victory would follow a surprise North Korea visit,"wrote the tabloid, suggesting that Abe is hoping his Liberal Democratic Party could secure the two-thirds majority needed to achieve his dream of revising the pacifist constitution.

Analysts acknowledge that the scenario - under which Abe travels to Pyongyang in August, returns with Japanese survivors and calls a snap poll - has a certain plausibility given the boost Abe's predecessor, Junichiro Koizumi, got from visits to Pyongyang in 2002 and 2004.

But they add that it also has big holes. "If you think about the Koizumi pattern, it is possible to come up with such a scenario, but I don't think it is likely,"said Katsuhiko Nakamura, executive director of the Asian Forum Japan think tank. "I don't think Prime Minister Abe intends to use that sort of trick to extend his political life." Abe has long made resolving the abductees issue a plank of his agenda. The Nikkei business daily said Pyongyang provided a list of some 30 Japanese still living in the North, but the government staunchly denies the existence of any such list.

North Korea admitted to the kidnappings in 2002 when Koizumi made an unprededented visit, resulting in the return of five abductees. He returned to Pyongyang in 2004, bringing back five children of the abductees and later arranging the release of two children and the American defector spouse of another.

Koizumi's flagging popularity soared after both visits, but in neither case did the rise last long enough to help the LDP in subsequent national elections.

Indeed, the party suffered a setback in a 2004 upper house vote two months after his trip at the hands of voters worried about the dispatch of troops on a non-combat mission in Iraq and the state of the creaking government pension system.

That suggests an election would need to come soon after a North Korea breakthrough - hence the speculation of a September vote if Abe were to visit Pyongyang in August.

Abe, who took power in December 2012 promising to revive the stagnant economy, could certainly use a boost in his ratings.

Support for his cabinet has slipped below 50 per cent in several surveys since his July 1 decision to drop a ban that has kept the military from fighting abroad since Japan's defeat in World War Two. On Sunday, an LDP-backed candidate lost a tight race for governor of the western prefecture of Shiga, the first high-profile vote since Abe's historic security policy shift.

Still, analysts were sceptical whether Abe would risk a snap election soon. No general election need be held until 2016.

The LDP has a majority in the powerful lower house, but chances it could grab a super-majority of two-thirds remain doubtful, analysts said. Nor would the LDP's partner, the New Komeito party, welcome an election at a time when leaders are trying to persuade dovish supporters they did the right thing by agreeing to Abe's security policy shift, analysts said. "People might think it makes sense to have an election as soon as possible ... but they have to think about the New Komeito," said Tsuneo Watanabe of the Tokyo Foundation. "I think people would advise Abe not to do this." In parliament's upper chamber, no poll for which will be held until 2016, the LDP relies on the New Komeito for a majority. Amending the constitution requires approval by two-thirds of both houses as well as a majority of votes in a national referendum, a hurdle never yet overcome. "There is no need to take the risk of calling a snap election," said independent political commentator Atsuo Ito.