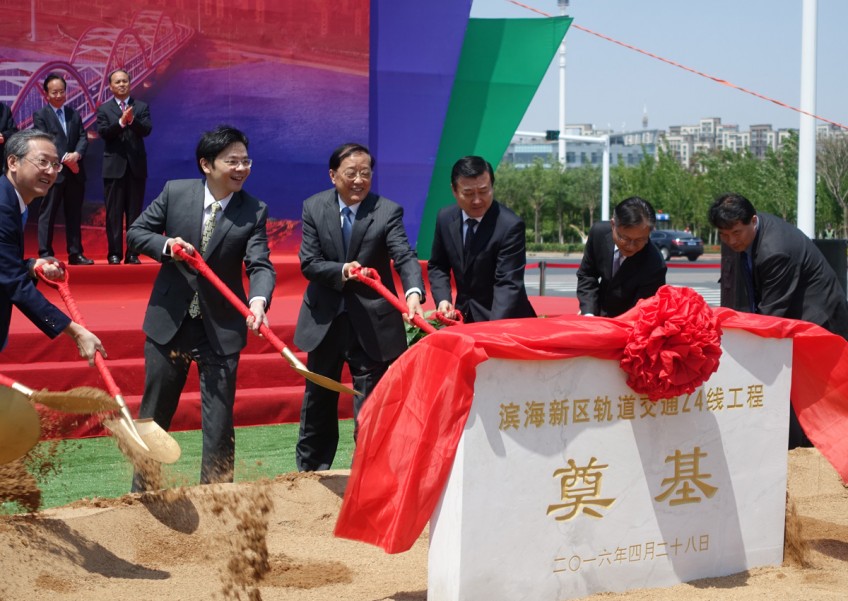 Travel between the Sino-Singapore Tianjin Eco-city (SSTEC) and other parts of Tianjin will be seamless and shorter when a rail link is ready in about four years.

More importantly, it could be a "game-changer" in spurring the eco-city's development.

Expected to be completed by 2020, the long-anticipated semi- express line will link the eco-city to a high-speed railway running between Tianjin and Beijing.

It will also link the SSTEC to a light rail line in the Tianjin Binhai New Area.

Currently, SSTEC residents who want to get to Tianjin city first take a 30-minute bus ride to Binhai New Area, where they switch to the train, a one-hour journey.

With the new rail link, travel time is expected to be cut to one hour.

"We are at a critical juncture of our eco-city development, where we have overcome some of the initial teething issues and are now at an inflection point," he told reporters on the sidelines of his visit to the SSTEC, his first as Minister for National Development.

"Over the next three to five years, if we are able to do well and focus on getting the job done, we can ensure a successful take-off."

Mr Liew Choon Boon, chief executive of the SSTEC's master developer, said the new 44km line would be a "game-changer" as it would facilitate greater movement in the Binhai area, which has a population of three million. Three of the new rail line's 23 stops will be in the eco-city.

The SSTEC, which broke ground in 2008, aims to build an environmentally friendly business park for 350,000 residents on a 30 sq km site in Tianjin.

But construction of the rail line was delayed, the reason believed to have been a revision of plans by the Tianjin government. The new line will have a higher load capacity and take a different route from what was proposed initially.

Mr Wong, who co-chaired the 7th SSTEC Joint Working Committee meeting with Mr Chen yesterday, said the eco-city has been enjoying greater interest from businesses such as developers, owing to word of mouth and as its population grows.

"I would encourage Singapore companies to take advantage of this... small window of opportunity," he said.

As to whether the third government-led project in south-western Chongqing city might steal the limelight from the SSTEC, Mr Wong said: "The best way for us to continue to ensure the eco-city remains on the radar screen is to deliver results."

Mr Chen said in remarks at the opening of the meeting that the SSTEC has served as a model for the new urbanisation that China is embarking on, and can further benefit from China's push to integrate the neighbouring regions of Beijing, Tianjin and Hebei.

Future plans for the SSTEC include a shopping mall by Keppel and a Sino-Singapore Friendship Garden and library in its central district. Development was previously focused on its 8 sq km start-up area.

The ministers later witnessed the signing of several agreements, including one between Singapore's National Parks Board and the Eco-City Administrative Committee on developing the Friendship Garden.