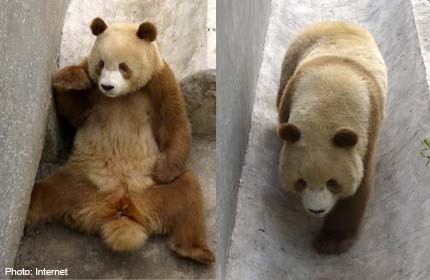 Giant pandas are indeed rare animals, but the panda in these photos is the rarest of the rare. Instead of being black and white, he is brown and white.

This special panda was recently shown to the media for the first time.

Qizai, the brown and white panda, is a resident of the Shaanxi Rare Wild Animals Rescuing and Raising Research Center in Shanxii Province in Northwest China.

Although there have been cases of brown pandas documented in the past, QiZai is the only one of his kind that is now in captivity.

He was found and captured when he was a two-month old baby in northwest China in 2009.

His mother, who was nearby when he was found, was reported to have normal black-and-white coloring.

The exact scientific explanation behind why such unusually-colored pandas exist is not yet clear, but it is thought to be caused by a genetic mutation.

There are also researchers who believe the coloring is a recessively inherited genetic trait.

Although there is no way to know if Qizai will pass on his unique coloring to his offspring, the researchers at the animal center in Shaanxi have announced that they have plans to start breeding him next year.