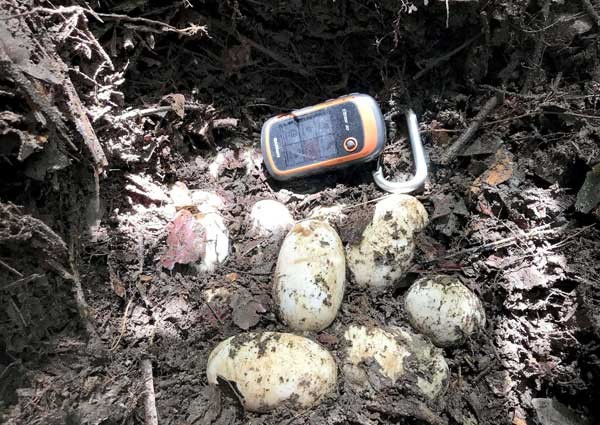 PHNOM PENH - Conservationists in Cambodia have found a nest with 19 eggs from one of the world's most endangered crocodiles, boosting hopes for a rare species threatened by poachers and habitat loss.

The clutch of fist-sized eggs was discovered this week by environmental officers and local villagers near a pond in southwestern Koh Kong province, according to the Wildlife Conservation Society (WCS), which assisted with the discovery.

The group had been searching for tracks, dung and other signs of wild Siamese Crocodiles, a species whose population has plummeted at an alarming rate in recent years.

Researchers believe only 400 adults still exist in the wild, mostly in Cambodia.

Their survival is threatened by poachers who supply eggs and adult reptiles to crocodile farms around the region, where their skins are turned into luxury belts, shoes and handbags.

"To avoid any threats, we moved the eggs to a safe place to hatch and track their progress," In Hul, from Cambodia's Fisheries Administration, said in a statement Wednesday.

After the eggs hatch, the baby crocodiles will be raised at a conservation centre until they are mature enough to be released into the wild, Eng Mengey of WCS, told AFP.

WCS said it was the first Siamese Crocodile nest found in the Sre Ambel river system during six years of research.

Earlier this year the group found a nest in the same river system belonging to Cambodia's Royal Turtle, an uplifting discovery for another reptile on the brink of extinction.

Deforestation and poaching have devastated many species in Cambodia, one of Asia's poorest and most corrupt nations.

In its haste to develop, the government has been criticised for allowing firms to clear hundreds of thousands of hectares of forest land - including in protected zones - for everything from rubber and sugar cane plantations to hydropower dams.