Thick ultrafine particulate pollution blanketed most of South Korea on Tuesday, prompting authorities to enforce emergency measures to combat fine dust again Wednesday for a sixth consecutive day in Seoul, Incheon and Gyeonggi and the North and South Chungcheong provinces.

Seoul's hourly average level of ultrafine particles -- those smaller than 2.5 micrometers in diameter -- recorded 184 micrograms per cubic meter as of 4 p.m., according to the National Institute of Environmental Research, a think tank under the Ministry of Environment.

The daily average ultrafine dust level was expected to reach an all-time high in Seoul since the government began collecting related data in 2015.

The average daily ultrafine dust level was measured at 199 micrograms per cubic meter at Sejong, 189 at Gyeonggi Province, 173 at Gangwon Province, 166 at North Chungcheong Province and 164 at Incheon as of 4 p.m. 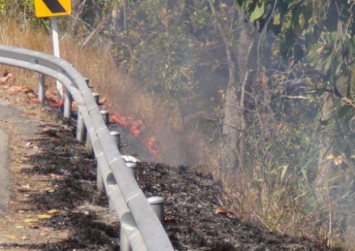 The density of PM 2.5 in all areas was forecast to be high Wednesday due to fine dust particles that had accumulated in and near the country from a lack of wind. Additional dust particles were expected to arrive from overseas. The air should be clearer Thursday, but only temporarily before pollution again worsens over the weekend, according to NIER.

The emergency measures are enforced from 6 a.m. to 9 p.m.

City or provincial governments can ban old diesel cars from streets and restrict the operation of coal power plants and other emissions facilities. They can also recommend the temporary closure or reduction of class hours and ask businesses to allow their employees to work flexible hours or from home.

In a related move, the Seoul Metropolitan Office of Education banned outdoor classes and activities at all elementary and secondary schools in the capital all day.

"I think we would have to restrict economic activities and car driving if necessary because ultrafine dust is cancerous and poses a grave threat to people's lives and safety," he told reporters.

"Smog, fine dust coming from China and stagnant air in recent days are major causes of dust pollution. It is time for the government to come up with all measures we can take," Noh said.

South Korea's authorities have classified levels of PM 2.5 above 35 micrograms per cubic meter as "bad" and above 75 micrograms as "very bad," while the World Health Organisation recommends keeping levels below 25 micrograms.