Relentless quest for truth and justice 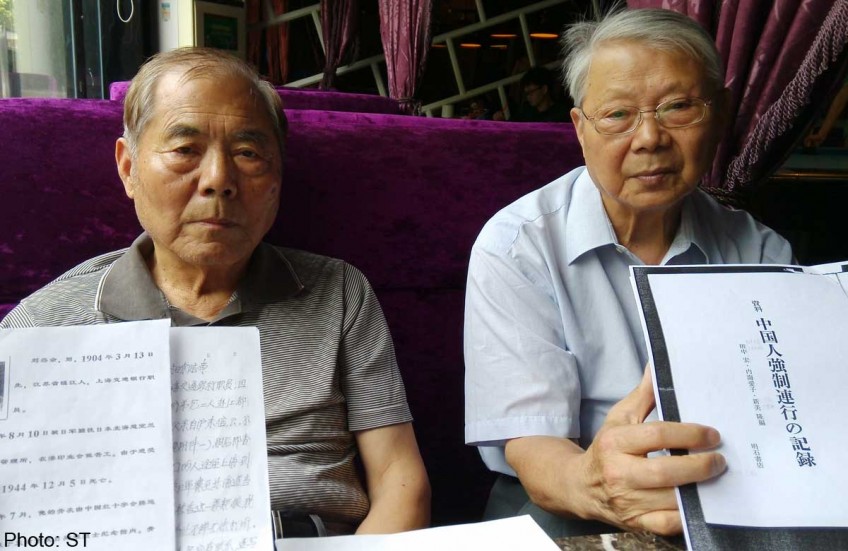 Mr Liu Xingru, 80 (L) and younger brother Mr Liu Senru, 78, have spent their lives trying to find out what happened to their father, who was abducted to Japan in 1944 and died as a forced labourer there. They are two of the 38 labourers' kin pursuing the law suit in Beijing against two Japanese companies.

For almost two years in his teens, Hebei native Zhang Shijie, now 88, had no name. He was known only by the number his Japanese captors had assigned him - 7744.

Along with close to 40,000 other Chinese men during World War II, he was abducted and put on a ship to Japan. For 11/2 years starting from mid-1944, he worked in a coal mine along with hundreds of other workers, and had just five steamed buns to eat every day. Unlike most of the others, Mr Zhang survived.

"It is a matter of principle that they acknowledge what they did to us and make amends," he told The Sunday Times.

Seven decades later, he is facing the best chance yet of realising that goal.

In March, the Beijing No. 1 Intermediate People's Court agreed to hear a legal suit brought by Mr Zhang and 39 other survivors and survivors' kin against two Japanese companies that used Chinese forced labour during the war.

This is the closest the survivors and their lawyers have come, out of almost 20 suits filed in both Japan and China since 1995, to getting the compensation of one million yuan (S$200,000) each and the public apology that they want.

Observers and the survivors themselves believe that the change in their fortunes is tied to a new political direction from the Chinese government, which is incensed at Japanese Prime Minister Shinzo Abe's perceived denial of wartime atrocities and attempt to remilitarise Japan.

"We are lucky because there is a boost now from the central government," said Mr Zhang Yang, 60, Mr Zhang Shijie's older son. "We have been waiting for very long for such a break."

Mr Zhang, who travelled to Tokyo in 2006 to file the suit, is just one of a handful of survivors still alive. The legal challenges began when close to 200 were still alive, said Beijing-based lawyer Kang Jian, who has represented forced labourers and comfort women for over two decades.

Since 1995, she and other lawyers have doggedly built the cases pro bono by tracking down survivors in remote, rural areas. Most of the suits were filed in Japan, and most were dismissed outright.

The Japanese government has always maintained that in the 1972 joint communique that normalised ties with China, Beijing agreed to renounce any demand for war reparation from Japan.

The survivors' lawyers believe that this does not apply to individuals. In accepting the case earlier this year, the Beijing court signalled that it agreed the survivors and their kin had standing.

Ms Kang said the legal battles have been supported by private donations from Japanese and Chinese parties, and that she has never had any contact with or encouragement from Chinese officials.

In fact, two plaintiffs - brothers Liu Xingru, 80, and Liu Senru, 78, whose father died in Japan as a forced labourer - believe the government has been disappointingly amiss in support for the labourers and their kin.

The Jiangsu natives were children when their father was abducted in 1944. Previously a bank employee, he could not handle the physical hardship and fell ill. His Japanese captors killed him, according to one account.

The brothers have spent their lives travelling across China to interview survivors and gather historical records in their quest for the truth.

"When I was younger, I used to see men on the street who looked like my father and grab them, wondering if it was actually him, still alive," said the elder Mr Liu, a retired teacher. "They took him away from us and we didn't even have the chance to bury him or hear them admit officially what they did."

His brother, a retired engineer, said their children will continue pressing the legal suit even after they die.

"This was a tragedy that befell our bloodline and we will never give up," he said.