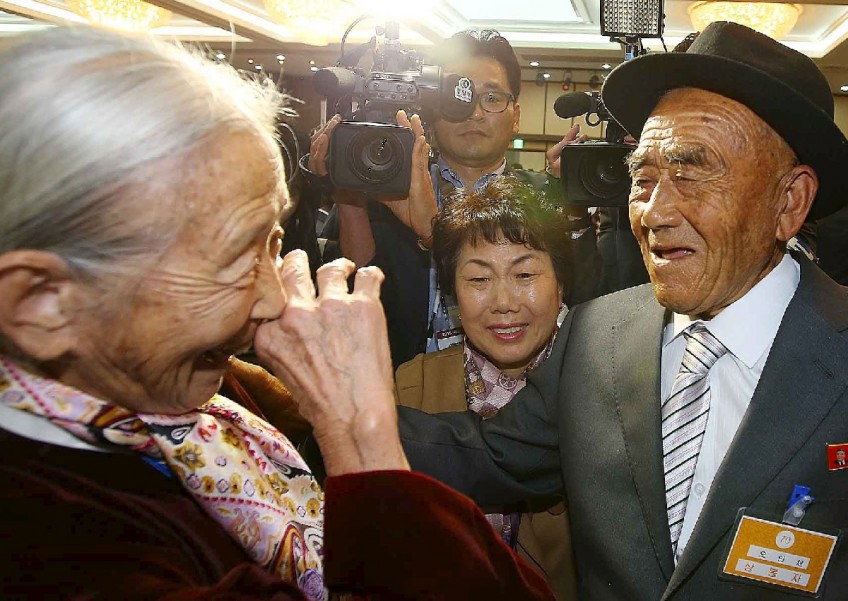 SEOUL - Around 400 elderly South Koreans met privately Wednesday with North Korean relatives they haven't seen for more than 60 years, on the second day of a highly charged reunion for families torn apart by the Korean War.

In contrast to the previous day when their tearful and, in some cases, clearly traumatic meetings were played out in front of TV cameras, they were allowed two hours in their own rooms to try to bridge the decades of separation.

Millions of people were displaced by the sweep of the 1950-53 Korean conflict, which saw the front line yo-yo from the south of the Korean peninsula to the northern border with China and back again.

The chaos and devastation separated brothers and sisters, parents and children, husbands and wives.

This week's reunion in a North Korean mountain resort is only the second to be held in five years, and the tightly controlled event - spread over three days - allows just 12 hours of actual face-to-face time.

And when it's over, it's really over.

The advanced age of so many participants means the chance of another meeting is almost non-existent on a divided peninsula that allows no civilian cross-border contact of any sort.

The South Koreans, some so frail they had to be moved by ambulance, arrived at the resort midday Tuesday after crossing the heavily militarised border in a convoy of buses.

After a brief lunch, they were led into a banquet hall where they first came face-to-face with the relatives who had contacted them for a meeting.

Some simply embraced and sobbed, while others stared and stroked each other's faces, seemingly unable to believe that they were in the same room.

Photos were exchanged and lovingly pored over, including old black-and-white pictures of the family when it was together as well as recent colour images of husbands, wives, children and grandchildren that neither side knew even existed.

The North Korean women wore traditional hanbok dresses, while the men were mostly dressed in dark suits. All seemed to be sporting badges of former leaders Kim Il-Sung and Kim Jong-Il - obligatory accessories in North Korea.

Among those meeting again for the first time were 85-year-old Lee Sung-Kyu from the South and Oh In-Se - the husband she was separated from at the outbreak of the war when she was 19 years old.

Lee was pregnant at the time and she was accompanied to the reunion by her 65-year-old son, who was able to use the greeting "father" for the first time in his life when Oh walked into the banquet hall.

"We were separated less than a year after getting married," Lee said. "There is so much to talk about after living separately all our lives. But how can I talk about it in only three days?" Even though she had assumed for years that her husband was dead, she never remarried - a fact she joked about with Oh.

"I raised our son for 65 years. You should pay me," she said, laughing.

Oh, wearing a grey suit, fedora and hearing aids, beckoned his son over and stroked his face.

The reunion programme began in earnest after a historic North-South summit in 2000, but the numbers clamouring for a chance to take part have always far outstripped those actually selected.

Among the generation that actually experienced the division of their families, the vast majority died without ever having any contact with their relatives in the North.