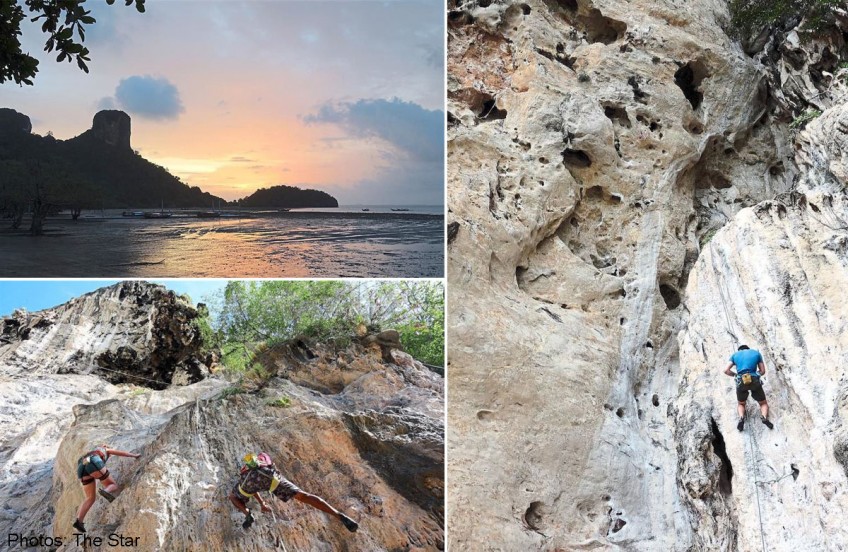 In popular film lore, Tom Cruise as Ethan Hunt in Mission Impossible II demonstrates how to be irresponsible while doing a free solo climb, while a not-so-svelte James T Kirk, in Star Trek V: The Final Frontier, attempts to do the same on the face of El Capitan in Yosemite.

And what is it that impels people to climb up vertical surfaces, especially when, after expending all that energy (not to mention exposing oneself to danger), they have to come down again?

It would appear to be a macho thing. A testosterone-fuelled loner takes to a rock face to work things out, but that's not really true, because lots of women are very good rock-climbers.

In fact many have a better power to weight ratio than men, who tend to be beefier, plus many men have additional weight in a beer gut to haul around.

Maybe it's something more primal, like climbing to safety - something in our primitive makeup that goes back to when human ancestors had to climb as a matter of survival or get eaten by saber-tooth tigers or whatever lurked around that was stronger or faster than humans.

I've had my share of fascination with rock-climbing. In actual fact, it's a good deal harder than it appears. Novice rock climbers tend to use plenty of upper body strength and become fatigued easily, while experienced rock climbers that you see virtually executing ballet on rock walls use a lot of leg power.

Legs are lots stronger than arms, and women have nicer legs than men - ergo, women are better at rock climbing. I'm sure there's flawed logic somewhere there.

Even if you have no intention of climbing, it's an incredibly seductive set up.

There are about a dozen rock climbing schools on Railay, staffed by lithe, local Thais. Even though many of them have adopted the attitude - sunglasses, tattoos, dreadlocks - beneath all that they're still very Thai, meaning they're polite, hospitable and warm people who pay lots of attention to food and speak in singsong tones.

The schools are all small, home-grown affairs, and provide everything from climbing shoes, harness, chalk bag, ropes and the services of an instructor, for a very reasonable fee.

The schools accommodate everyone from rank beginner to experienced climbers, and almost any age, from single-digit tots to white-haired and surprisingly agile climbers who more than make up what they lack in sheer strength with experience and grace.

There are dozens of mapped, bolted routes on the limestone cliffs of Railay. Because of the proximity to the sea, the high humidity and the chemistry of the rocks themselves, steel bolts corrode at an alarming rate, leading to a collaborative effort to replace steel bolts with much hardier, but expensive, titanium bolts.

The project, called Thaitanium, is funded from public donations as well as contributions from the rock climbing schools and this website (http://thaitaniumproject.com/) provides some insight into rock climbing in Railay.

Climbing in a natural environment is very different from climbing in a rock-climbing gym. The gym offers enormous flexibility and a safe environment, but a natural wall has an unyielding allure, the feel of cool rock to your cheek, and when you couple that with the stupendous scenery of Railay, it's almost irresistible.

Instructors set up the ropes for every climb, act as belayers and cheerleaders for the reluctant and the not-so-confident. They observe every newcomer and adjust the next climb according to the person's capability and enthusiasm.

"Do it for your country", Ip urged, as I was about to start my climb. Ip was a soft-spoken fellow with a thick head of hair and a wiry frame which belied the easy grace with which he climbed, as in an intimate dance with the rock.

Beginners like me, on the other hand, depended on sheer grunt-power, consequently becoming exhausted easily.

It goes without saying that a fear of heights is an absolute no-no. Many novices are wary about jamming a hand into a crevice or crack, since snakes, scorpions and other creepy-crawlies like dark cool nooks.

The other common fear is that of letting go - at the top of the climb, many novices cling onto the rock, or onto the safety line, when in fact, letting go and allowing yourself to fall freely at a pace controlled by the belayer is surely a metaphor for the sheer freedom of not clinging onto something.

Coming down can be lots of fun, bouncing off the wall with splayed legs in a fast abseil. As in so many endeavours, then, letting go can be a great relief and joy, or the absolute terror of the unknown.

The recent expert on letting go, of course, is Princess Elsa of Frozen fame.

Routes are graded by difficulty according to the French grading system. Technically difficult climbs don't have to be high - even off ground level, rock surfaces can feature smooth overhangs or have a paucity of holds.

There are plenty on Railay, where much of the limestone has been undercut by wave action, and the very first move is to place toes on tiny protrusions and haul yourself up over a low overhang.

There are only a few beginner rock surfaces. On a busy day, they have the appearance of a carnival, with dozens of would-be rock climbers gaping up at their compatriots struggling up an unfamiliar rock surface.

Instructors, actively belaying, also shout a variety of instructions at their new charges.

"Go to your left!" "Right foot to right knee!" "Left foot to the right!" "Touch your nose with your toe!" Or perhaps I just imagined that last one.

Instructors are a cheerful lot: "You want to come down? 200 baht (S$8)!" or "My grandmother can climb this rock in ten seconds!"

Anyone can climb. It's a natural action, but it rapidly becomes difficult as you ascend, as handholds and footholds become scarce or beyond your reach.

The natural reaction is to cling on, while gravity seduces you to fall backward, and this constant tugging against gravity can quickly tire you.

Good rock climbers glide smoothly, rarely pausing for long at a single stop, constantly shifting their weight from one point to another.

I watched experienced climbers ascend in a seamless series of moves, nothing dramatic or jerky, just smooth, deliberate actions, beautiful to watch, and taking lots of practice to execute.

When you're up on the rock, although there's a crowd below, and an instructor yelling instructions, a sort of funnel effect can take place if you're focused enough, and everything else falls away, leaving you and your breathing and the cool, unyielding rock, and that next handhold or foothold.

There was also the invaluable experience of a grip giving way, and feeling what it was like to peel, inexorably and inevitably, away from the wall, and hang in mid-air, suspended on a safety rope.

At the top, there was, for me, the sense of relief that the climb was over and that I could let go - perhaps a metaphor for life, with its struggles.

But Ip would always encourage me to tarry a while, to "look around", and I would, at the beach below, the green bay beyond and the tall cliffs around me.

It was a fresh perspective from the usual eye-level view, and there would be a moment of peace and quiet, with a slight breeze from the sea.

I recalled the tagline of one of the rock climbing schools in Railay that summed it perfectly: "Climb not with strength, but with the mind".

November to April is the "dry season" here and probably the peak period for climbing.

What is euphemistically called the "Green Season", or the rainy season, is from May to October. In practice, it doesn't rain all the time, but when it does rain, there's no rock-climbing on slick rock walls.

To compensate, there are fewer people and hotel rates are lower in the "green season".

There are about a dozen rock-climbing schools on Railay and nearby Ton Sai beach which offer similar courses at similar rates, which are around 900 baht for a 1/2 day course, 1600 baht for a full day, and 6000 baht for a 3-day course, with variations depending on whether hotel pickup is needed for those not staying on Railay.

Prices include all equipment (shoes, chalk bag, harness), ropes and the services of an instructor, water and insurance. The 3-day course is a structured course which teaches Lead Rope climbing and Multi-Stage climbing.

There's also DWS or Deep Water Solo, which involves a boat trip to an offshore limestone outcrop, a solo climb, fall into deep water and retrieval by the boat - but in the Green Season, seas are often too rough for DWS.

Rock climbing in Railay started in the 1990s, and is thought to have been introduced by foreign climbers lured to the limestone cliffs. In his book, "King Climbers Thailand Route Guide Book", Somporn Suebhait (aka "King" of King Rock Climbing School), one of the early Thai rock climbers, describes the early days when local Thais first took to rock climbing themselves and how the rock-climbing ecosystem on Railay evolved.

There are direct flights from KL to Krabi airport. From the airport, it's 30-40 minutes by road and a 20-minute boat trip to Railay. Accommodation choices are vast, from backpacker style hostels to luxury resorts.

Would you like to be paid for your articles or photos about your adventures? We are interested in activities whether on land, water or in the air.

Apart from describing what a great time you had, you can also share ideas on safety, equipment, training/preparation and eco-friendly practices. Feel free to write in to our coordinator, Andrew Sia, at star2@thestar.com.my.