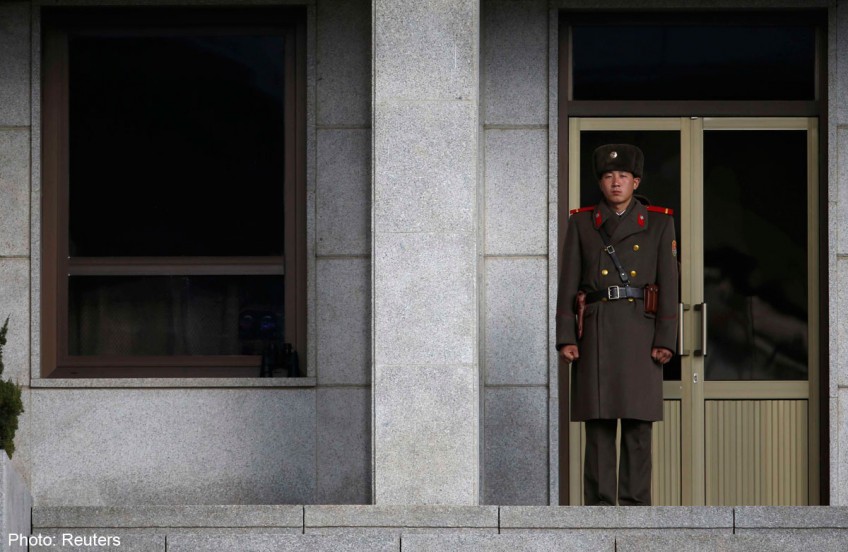 A North Korean soldier looks south from the North side at the truce village of Panmunjom November 12, 2014.

SEOUL - A North Korean believed to be a runaway soldier killed four Chinese citizens during a robbery after he crossed the border into China in search of food, media reports said Monday.

Both cited sources in the border areas between China and the North.

The victims were either shot dead or beaten to death, Dong-A said, adding he was later shot and captured by Chinese authorities.

"Killing several Chinese nationals... is a major crime, so there are good possibilities that China, unlike other runaway North Korean soldiers captured before, will not hand him over to the North," said an unnamed Seoul official quoted by Yonhap.

All able-bodied young men in the North are subject to 10 years of military service. Many army bases are known to suffer food shortage and starving troops often cross the border to China in search of food.

Private markets cropping up across the North in recent years have helped ease starvation among ordinary citizens.

"Chinese authorities have already reached an agreement with the North not to officially announce it," Yonhap quoted the Seoul official as saying.

Dong-A said the victims were two elderly ethnic Korean couples. Koreans make up for about 30 per cent of the population in China's Yanbian Korean autonomous prefecture that borders the North.

"It has become pretty common for the past decade that North Koren soldiers sneak across the border at night to seek food here," Dong-A quoted one resident of the area as saying.

An official with the Yanbian police told AFP he had no knowledge of the reported incident.

The border with China is a major route for escape for North Koreans fleeing poverty and repression at home. They also cross the border temporarily to find food and jobs.

Thousands flee by secretly crossing into China and later travelling to a third country before seeking resettlement in the South.