A Russian man has been found injured on the slopes of Mount Agung in Bali on Friday, 10 hours after he was declared missing. The man who was identified only as Alexander was found with an injury to his leg and wrist.

Alexander was reported missing by his friends on Thursday night. The 28-year-old was climbing the volcano with three other people, two from Ukraine and one from France. They had ignored the authorities' alert status that advised people to stay away from the volcano's peak.

They had started to hike the mountain on Thursday morning. Alexander separated from the group during the journey and went missing.

The Bali Search and Rescue Agency immediately started an operation to find him and entered the forbidden zone on the volcano. He was found safe at around 10 a.m. on Friday morning at a height of 2,049 meters above sea level. 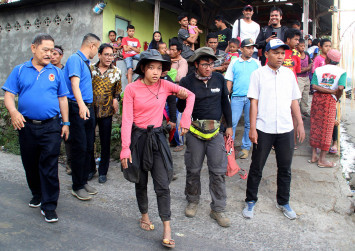 "[The climbers] are safe. [Alexander] suffered an injury to his leg and wrist," said agency head I Made Junetra on Friday.

Karangasem Disaster Mitigation Agency head Ida Bagus Ketut Arimbawa deplored the action of Alexander and his friends. "Hiking Mt. Agung is prohibited as the volcano could erupt at any time," Arimbawa said.

Arimbawa explained that the volcano is now on the third alert level and the area 4 kilometers from the summit is prohibited for any activity.

The Volcanology and Geological Disaster Mitigation Center has announced that the alert status of the volcano is at the third level out of four stages of emergency status, which means that hiking and other activities are not allowed within a radius of 4 km from the summit.

The authorities have forbidden climbing Mt. Agung since volcanic activity increased in 2017.

"We hope that all people, including tourists, obey there rules," said Arimbawa.