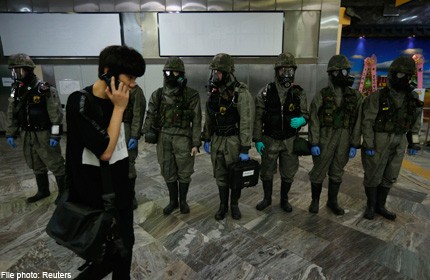 SEOUL - South Korea's defence ministry said Monday it had ordered its staff to install a smartphone application that restricts key functions like the camera in a bid to prevent military leaks.

The ministry said that, from Monday, its 1,500 staff are no longer allowed to carry smartphones into their offices without installing the app, called "Mobile Management Device".

The order caused a long queue at the gates of the ministry on Monday because some 20 per cent of the staff had failed to install the app, officials said.

The ministry declined to confirm a report from the Yonhap news agency that claimed some staff had refused to install the app due to concerns over privacy.

Ministry spokesman Kim Min-Seok told reporters that the app, which restricts the use of cameras and audio recording, prevents leaks through smartphones and stops outsiders from hacking in to the devices of defence ministry officials.

"We've developed a system to restrict the core functions of smartphones because of concerns that our work could be leaked through them," he said.

For now, the app only works in the ministry compound. Officials said all South Korean soldiers would be ordered to install it later.