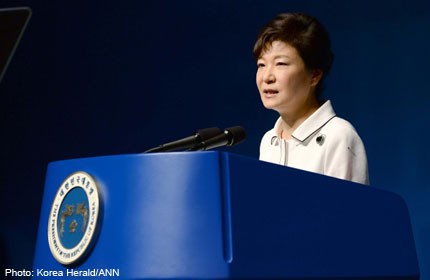 The offer came a day after the two sides agreed to take steps to reopen the Gaeseong industrial park following a 133-day freeze.

In her first Liberation Day address as president, Park also called on the communist neighbour to "abandon its nuclear ambition and join the international community, open a new era on the Korean Peninsula and resolve its people's pain and difficulty together."

"I hope this (Gaeseong) agreement will help correct wrong practices of the past inter-Korean relationship and begin a new one of coexistence," Park said at a ceremony in Seoul.

"First of all, I'm hoping to lighten the torment of separated families in the South and the North. I hope North Korea will open the door of its heart so that they will be able to be reunited around Chuseok," she said, referring to the Korean Thanksgiving that falls on Sept. 19 this year.

"By making the DMZ a peace zone, I hope we will remove memories of war and threats of provocations left in their consciousness and take on a new start to make the Korean Peninsula a place for trust, harmony and cooperation," Park added.

With the breakthrough in Gaeseong, the president's surprise proposal appears to be breathing new life into the moribund inter-Korean programs also including tours to Mount Geumgangsan. Seoul has been calling the joint factory park a "touchstone" for cross-border exchanges and cooperation.

The Unification Ministry is expected to deliver formal proposals as early as Friday through the communication channel at the border village of Panmunjeom.

"We will swiftly review and carry forward concrete steps for family reunions given the president's offer and that about one month is left until Chuseok," a ministry official told reporters on condition of anonymity due to the sensitivity of the matter.

"The government's basic stance is that as many people as possible should be reunited to heal the wounds of separation."

Since 2000, the two countries held meetings for the families displaced by the Korean War mostly around major holidays such as Aug. 15 Liberation Day and Chuseok.

The reunions were last held in October 2010 and halted in the wake of the North's sinking of a South Korean corvette and artillery firing on a border island in the West Sea earlier that year. Seoul demanded an apology for the attacks, for which the regime denies responsibility.

The North suggested a new consultation to resume family reunions and Geumgang tours after their second round of Gaeseong talks on July 10.

But it called off the plan after the South only agreed to family gatherings to focus on the then ongoing negotiations for the time being.

Now the outlook appears brighter for the reunions given their humanitarian nature and survivors' aging, though it could become more complicated if the North attempts to package the issue with Geumgang tours or early normalization of the Gaeseong park.

In August 2012, the South's Red Cross offered to meet its North Korean counterpart to arrange a fresh round of gatherings. But Pyongyang demanded as a precondition the lifting of economic sanctions and the restart of the tour business, which Seoul deemed unreasonable.

Central and local governments have floated various ideas since the Roh Moo-hyun administration but none of them were materialized due chiefly to Pyongyang's resistance.

Park unveiled her own vision during her trip to the US in May and has since requested support from the UN, China and other countries. It calls for demilitarizing part of the 4-kilometer-wide zone and turning it into a public park.

Contrary to its name, much of the area is occupied by some 80 South Korean guard posts and up to 150 North Korean ones. The communist country has also deployed a slew of artillery and other military apparatus.

Kim Yang-gon, head of the United Front Department of the North's ruling Workers' Party, said the ambitious plan hinged on the success of the Gaeseong complex during his recent meeting with Park Sang-kwon, honorary chairman of Pyeonghwa Motors Corp.

The South Korean government has since May launched a task force for the project within the Unification Ministry.

"The task force has come up with a plan in consultation with related agencies and experts," a ministry official said, declining to elaborate as its development was "premature."

"There are lots of ideas at both private and government levels about (the park's) location, area and scale."

If Pyongyang accepts both offers, it will likely add weight to Park's "trust-building process" designed to reengage Pyongyang while deterring its saber-rattling. It is aimed at building trust gradually through small projects, which would then lead to greater cooperation.

"To safeguard peace, deterrence is needed. But creating peace is possible when mutual trust is built," Park said during the speech.

"Though it may take some time, I will consistently carry out the Korean Peninsula trust-building process that fosters genuine peace and trust by establishing inter-Korean relations in line with common sense and international norms."