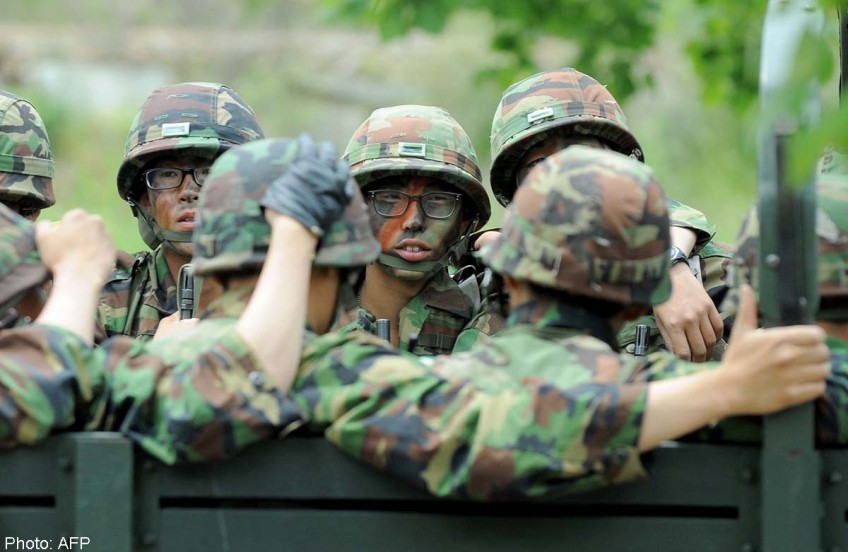 SEOUL - A South Korean conscript who went on a deadly shooting rampage last month was humiliated by fellow soldiers who mocked him and drew cartoons depicting him as SpongeBob SquarePants, military officials said Tuesday.

The 22-year-old sergeant surnamed Lim opened fire on members of his own unit at a guard post near the tense border with North Korea on June 21, killing five and wounding seven.

He was captured alive two days later after he shot himself in the chest in a failed suicide attempt following a 24-hour standoff with thousands of troops.

Announcing the result of a formal probe into the case - including lengthy interviews with the shooter - senior military investigator Seon Jong-Chul said Lim had faced repeated mockery by both lower and higher-ranking members of his unit.

On the day of the shooting, he had been especially enraged by cartoons drawn on the back pages of the unit's daily border patrol logs, depicting Lim as a series of goofy, immature cartoon characters, including SpongeBob.

"Other troops saw it as a small joke, but (Lim) said he had been greatly distressed by it," Seon said, adding that the cartoons had "triggered a flashback" to when Lim was bullied in high school.

Although other soldiers in the unit were also caricatured in the log book, Lim took the cartoons depicting him as a personal attack.

Lim joined the army in 2012 and was only three months away from being discharged.

He had difficulty adapting to the army and psychological evaluations had advised senior officials to pay special attention to him.

The South Korean armed forces rely heavily on the military service system, with conscripts - most in their early twenties - accounting for the lion's share of its 690,000 active personnel.

Psychiatric experts say the pressures facing the young servicemen can be daunting when, after what is often quite a cosseted childhood and teenaged youth, they are suddenly plunged into a world of harsh military discipline.

Barrack-room bullying of fresh conscripts used to be rampant and has been blamed for a number of suicides and similar shooting sprees in the past.

Before shooting himself, Lim had written a brief note - released by the military Tuesday - which reflected feelings of persecution and inadequacy.

"Anybody would have felt that life was more painful and difficult than death if they were in my shoes," he wrote.

"Like little children who kill insects without feeling guilty... they do not know how much pain they can give to someone," it added.

Sun said the investigation had identified six surviving members of Lim's unit who had participated in the bullying and would face disciplinary punishment.

Last week, Lim himself filed a lawsuit against a senior officer in his unit for insulting behaviour.