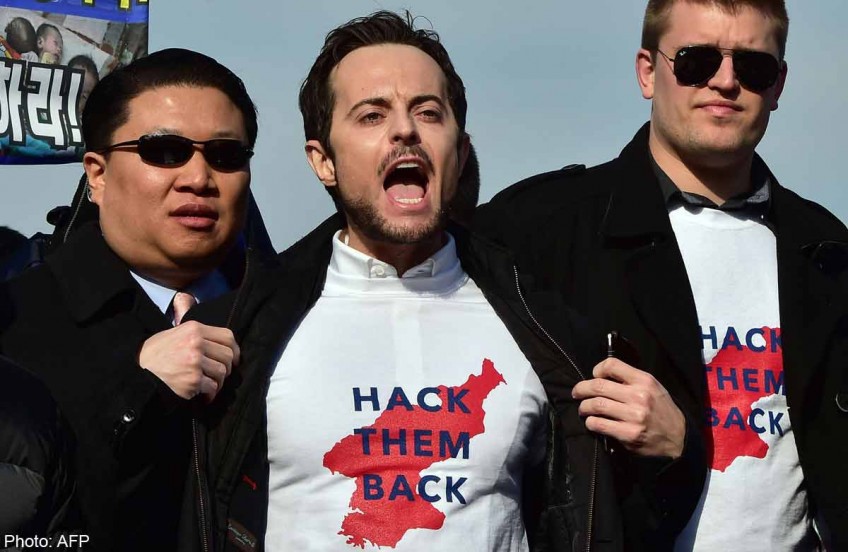 Thor Halvorssen (C), president of the US-based Human Rights Foundation (HRF), shows his T-shirt reading "Hack Them Back", supporting South Korean activists to sneak copies of the Hollywood comedy "The Interview" into North Korea if Pyongyang rejects Seoul's offer for dialogue, despite the North's threats of retaliation.

SEOUL - South Korea vowed Friday to to take steps preventing activists from sending copies of Hollywood film "The Interview" into North Korea next week, citing a "limit" to freedom of expression.

Activists plan to launch some 10,000 copies of the film - a comedy about a fictional CIA plot to assassinate North Korean leader Kim Jong-Un whose release infuriated Pyongyang - as well as 500,000 propaganda leaflets by balloon across the heavily-militarised border on or around March 26.

Pyongyang has long condemned such balloon launches and threatened retaliation, and local residents have complained the activists are putting their lives at risk by making them potential targets.

The South's unification ministry called Friday for pre-emptive steps to protect local residents, saying there is a "limit" to freedom of expression.

"If such a movement is detected in advance, the government will take necessary measures because it may threaten the security of residents there," ministry spokesman Lim Byeong-Cheol told reporters.

Seoul insists the activists have a democratic right to send the leaflets, but has appealed for restraint to avoid overly provoking the North.

In October last year North Korean soldiers attempted to shoot down some balloons, triggering a brief exchange of heavy machine-gun fire across the border.

The launch will mark the five-year anniversary of the sinking of a South Korean warship in 2010, with the loss of 46 sailors. The South pinned the blame on the North and effectively froze trade and investment ties.

The activists remained tight-lipped about the exact location and time for the launch.