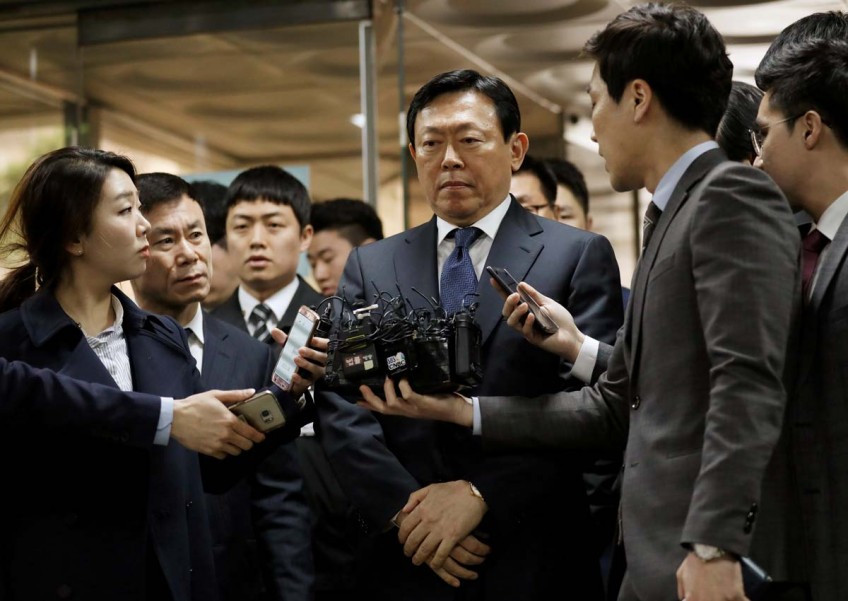 The proceedings against company chairman Shin Dong-Bin, 61, his brother, sister and father - plus the patriarch's mistress nearly 40 years his junior - come as the South's fifth-biggest conglomerate endures a barrage of condemnation from China.

The company provided land to Seoul to host a US missile defence system, infuriating Beijing, and nearly 90 per cent of its Chinese Lotte Mart stores have since been forced to close by either authorities or angry demonstrations.

The trial is the latest blow to the reputations of the family-controlled conglomerates, or "chaebols", that powered South Korea's economic growth in past decades.

More recently they have increasingly become the focus of public anger over corruption and inequality and corruption, as in the scandal that saw president Park Guen-Hye removed from office earlier this month.

Lotte chairman Shin is accused of costing the firm 175 billion won (S$216 million) through a series of tax evasions, financial scams and irregularities.

He has been also charged with negligence for awarding lucrative deals or paying "wages" worth millions of dollars to relatives who made little contribution to management.

"I am sorry for causing concern. I will co-operate with the trial sincerely," Shin told reporters, bowing briefly before entering the courtroom Monday afternoon.

Similar charges were levelled against his older brother Shin Dong-Joo, his older sister Shin Young-Ja, as well as their father Shin Kyuk-Ho.

It was not clear whether the nonagenarian founder was in court, but he did not pass through the gauntlet of reporters packing the entrance to the court building in Seoul.

His 57-year-old mistress was also charged with embezzlement for pocketing large sums in "wages" although she had little role in management.

The five were formally indicted by prosecutors in October.

Their alleged offences are not directly connected to the scandal that brought down Park.

The Seoul-based group, founded in Tokyo in 1948, has a vast network of businesses in South Korea and Japan with combined assets valued at more than US$90 billion (S$125 billion).

The decision by Seoul to deploy the US Terminal High Altitude Defence (THAAD) system to guard against threats from the nuclear-armed North angered China, which fears it would undermine its own military capabilities.

The first parts of the THAAD system arrived in the South two weeks ago after Lotte signed a land swap deal to provide a golf course in the southern county of Seongju to host the missile batteries.

Since then officials have shut down dozens of Lotte retail stores in China, ostensibly over "safety issues" as angry protestors hold demonstrations across China denouncing the group and other South Korean businesses.

Lotte, focused on food, retail and hotel businesses, has invested more than US$8 billion in its Chinese operations and has more than 120 outlets in the country, with 26,000 local employees.

The Shin family become targets of state probes after 2015 when a bitter and very public fight between the two brothers for control of the group fanned public anger over how the South's dominant family-run conglomerates conduct their business affairs.

The feud saw highly public mudslinging between Shin Dong-Bin and Shin Dong-Joo, with accusations of mismanagement, personality flaws, and manipulating their frail, aged father whose mental faculties had been called into question.

The dispute ended after board members sided with Shin Dong-Bin, but Lotte since then has come under tougher regulatory scrutiny, with state probes targeting the Shins.