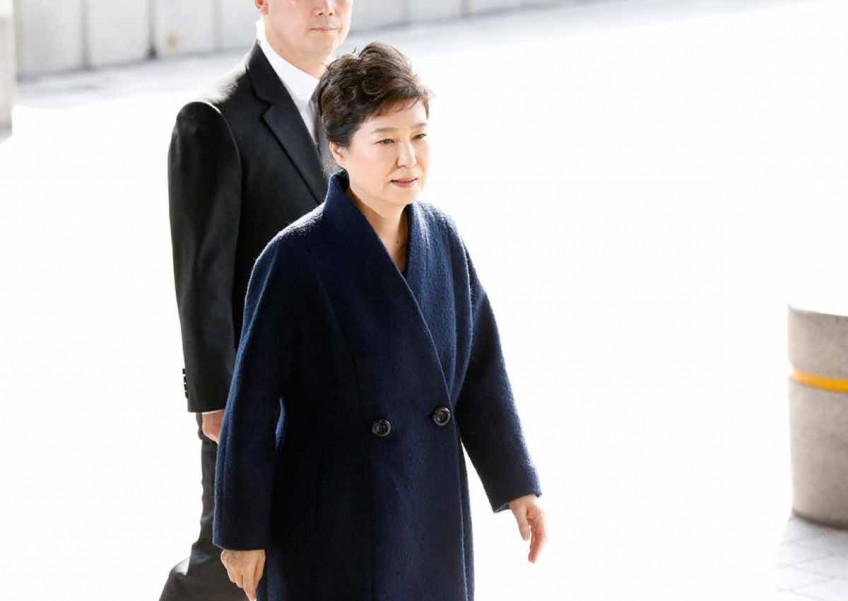 SEOUL - Ousted South Korean president Park Geun-hye apologised to the country on Tuesday as she arrived at prosecutors' offices for questioning as a criminal suspect in a corruption scandal that has gripped the country for months.

Park, 65, became South Korea's first democratically elected president to be removed from office when the Constitutional Court this month upheld her impeachment by parliament in December.

She has been accused of colluding with a friend, Choi Soon-sil, to pressure big businesses to donate to two foundations that backed her policy initiatives. Park and Choi have both denied wrongdoing.

"I am sorry to the people. I will faithfully cooperate with questioning," Park said in front of media at the steps of the prosecutors' office building, her first comments directly to the public since she was dismissed.

Park has not been charged but could face more than 10 years in jail if convicted of receiving bribes from bosses of big conglomerates, including Samsung Group chief Jay Y. Lee, in return for favours.

After about five hours of questioning, an official from the prosecutors' office told reporters Park had been forthcoming but he declined to elaborate on what she had been asked, on her responses or on what charges she might face.

Park's fate and the widening corruption investigation have gripped the country at a time of rising tension with North Korea and China.

Television cameras followed her as she was driven in a black sedan to the office, a few minutes away from her home, escorted by police who cleared the road. Earlier, media saw Park's hairdresser arriving at her home.

Park was dressed in a dark navy coat and trouser suit with grey shoes, and looked sombre as she stood to deliver her brief remarks.

'EQUAL BEFORE THE LAW'

Park, who was accompanied by two of her lawyers, was given tea before her first session of questioning by two prosecutors and an investigation official, prosecutors said in a statement.

One of her lawyers, Yoo Yeong-ha, is known as her "Bulletproof Vest" and has been her legal voice since the beginning of the scandal in October.

Park declined to have her questioning recorded by video camera, prosecutors said.

She later had a lunch break of some seaweed rice rolls and a sandwich, one of her lawyers said.

The questioning is expected to last late into the night and another of her lawyers, Sohn Bum-kyu, told a television channel Park would choose whether it would go beyond midnight.

Prosecutors could detain her but the official from the prosecutors' office, who briefed reporters on the condition he not be identified, said Park would go home after this session.

He declined to say if she would be summoned again or whether a warrant for her arrest would be filed.

Sohn said Park's health was not at its best and she had been getting medical checks between questioning sessions. The prosecution official said his office had not received any medical note regarding her health.

The scandal has undermined support for Park's conservative ruling party. A liberal opposition politician, Moon Jae-in, is leading in opinion polls and is expected to win a snap presidential election on May 9.

Park's supporters and opponents have held protests in Seoul for months but police have managed to keep them apart and no serious violence has broken out between them.

A spokesman for Moon said uncovering the truth would help heal divisions. "We want former president Park to tell the truth and ask for forgiveness. All are equal before the law," said the spokesman, Park Kwang-on. "Finding the truth is a first step for the unity of the people."

A top official from Park's party urged prosecutors not to be swayed by public opinion but to find the truth and give Park the cordial treatment a former president deserved.

"Everyone, not only me, is feeling miserable and distressed," the party official, Chung Woo-taik, told a meeting.