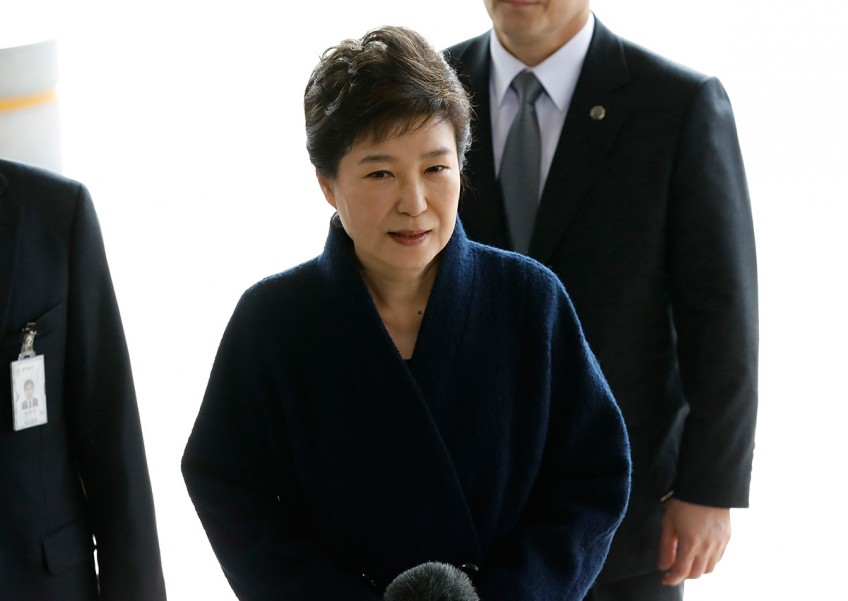 Seoul - South Korea's ousted president Park Geun-Hye was spending her first day in custody Friday after a court ordered her arrest, with her opponents crowing and her supporters crying.

The former head of state stared straight ahead, apparently trying to maintain her composure, as she was driven to the Seoul Detention Centre through a barrage of flashbulbs shortly before dawn.

After a marathon hearing on Thursday a court in the capital ordered Park's arrest in connection with the corruption scandal that brought millions of people onto the streets and saw her impeached.

Prosecutors have yet to specify the formal charges against her, but have previously said she is suspected of bribery, abuse of authority, coercion, and leaking government secrets.

"It is justifiable and necessary to arrest (Park) as key charges were justified and there is risk of evidence being destroyed," the court said in a statement.

The decision made Park, 65, the third former leader to be arrested over corruption in Asia's fourth-largest economy, where politics and big business have long been closely tied.

It is a dramatic step in the disgrace of South Korea's first woman president.

The liberal Democratic Party, which is favourite to win the election on May 9 to choose Park's successor, said in a statement that the move showed "all are equal before the law".

"We hope today's landmark decision will provide fresh momentum in revealing the truth about the scandal of an unprecedented scale," it added.

But Park's own Liberty Korea party - which has changed its name in an effort to distance itself from her - called the move "regrettable".

Loyalist lawmaker and presidential hopeful Kim Jin-Tae was furious, calling it "the death knell for the country's rule of law".

While in office, Park took a tough approach to nuclear-armed North Korea, repeatedly calling for stronger international sanctions against the regime and openly urging more of its citizens to defect to the South, and Pyongyang's official organs were relatively quick to report her arrest.

"Traitor Park was... thrown into a solitary cell in a prisoner uniform," the state KCNA news agency said, adding her detention was "welcomed" by South Korean media and a "majority of the people".

Despite the early hour, about 50 of her supporters were at the detention centre when Park arrived, waving national flags and chanting slogans demanding her release.

According to normal procedure, she would have been processed - including being fingerprinted and having her mugshot taken - changed into prison garb with her prisoner number on the chest, and put in a cell.

Under South Korean law prosecutors now have up to 20 days in which to indict her.

Choi Soon-Sil, Park's secret confidante at the heart of the scandal, is being held at the same centre, as is Samsung heir Lee Jae-Yong.

Choi is already on trial for forcing top local firms including the tech giant to "donate" nearly $70 million to non-profit foundations which she allegedly used for personal gain, while Lee has been indicted for bribery and other offences.

Ahead of Thursday's hearing, prosecutors submitted around 120,000 pages of documents to the Seoul Central District Court, and said it would be "counter to the principle of fairness" if Park were not arrested.

The former leader, who has denied the accusations, was grilled for nearly nine hours by the judge.

That came after she underwent a 21-hour interrogation session at the prosecutors' office last week, having refused repeated requests to be interviewed while in power.

Park, daughter of late dictator Park Chung-Hee, secured the largest vote share of any candidate in the democratic era when she was elected in 2012.

But she was impeached by parliament in December, as the scandal combined with mounting economic and social frustrations to trigger huge candlelit demonstrations. The Constitutional Court later upheld the decision.

She had been "lost for words" when authorities asked for her arrest, the Chosun Ilbo daily quoted an unidentified pro-Park lawmaker as saying.

Another said she had been having "sleepless nights and skipping meals" since moving out of the presidential palace.

She is also accused of letting her friend, a high school graduate with no title or security clearance, handle a wide range of state affairs including nomination of top officials.

Park is also said to have cracked down on thousands of artists who had voiced criticisms of her or her father's iron-fisted rule from 1961 to 1979.

She has repeatedly apologised for the upset caused by the scandal but not admitted any wrongdoing, blaming Choi for abusing their friendship.