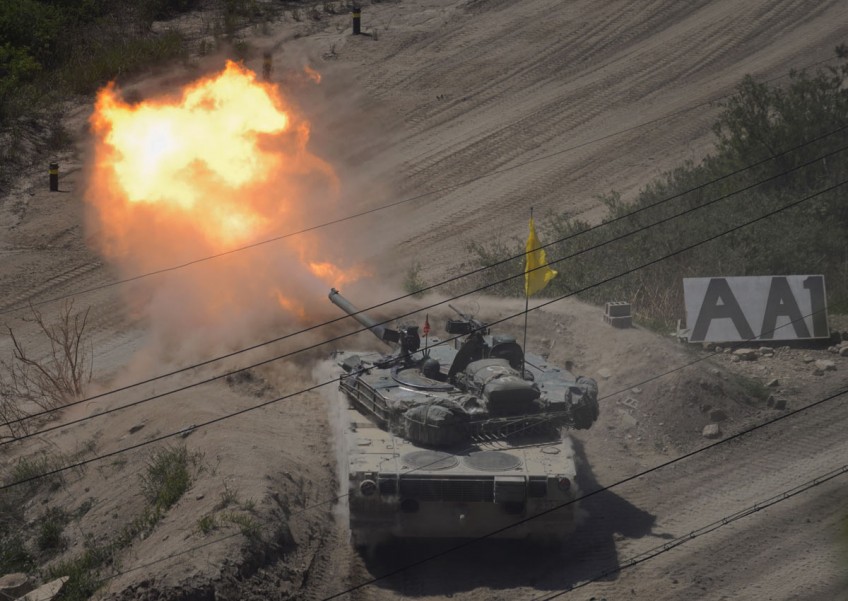 A South Korean tank of the 8th Mechanized Infantry Division takes part in a live-fire exercise at a training ground in Cheorwon, near the demilitarized zone (DMZ) in May 2015.
AFP

At the same time, she said Seoul would try and work with Pyongyang to increase the frequency of family reunions for those separated by the 1950-53 Korean War.

In an annual budget address at the National Assembly, Park outlined plans to increase defence spending by four per cent next year to 39 trillion won ($34.5 billion) -- higher than the overall budget growth of three per cent.

"We will drastically beef up our defence capability ... in order to effectively respond to potential provocations by the North and other security threats around the Korean peninsula," she said.

The President specifically cited a recent escalation in cross-border military tensions that was triggered by a landmine explosion that maimed two Seoul soldiers.

Seoul took a hard line with Pyongyang over the incident as both sides put their militaries on high alert and warned of a possible armed conflict.

In the end, North Korea appeared to blink first, approaching the South with a proposal for talks.

"The provocation was another reminder that we can open the door to normal dialogue and co-operation only when we ... maintain a watertight defence posture," Park said.

The talks that eventually took place reached an agreement in late August to defuse tensions and hold a rare reunion for divided families.

The week-long reunion event, held in a North Korean mountain resort, wrapped up on Monday after allowing nearly 1,000 people to meet long-lost relatives for the first time in more than six decades.

The emotional gathering was only "small progress," Park said, noting the complaints about the frequency of the reunions and the limited time alloted for each one.

"The government will make all possible efforts to hold the reunions on a regular basis and allow the separated families to check whether their relatives are alive," she said.

Millions of people were displaced by the sweep of the Korean conflict that sealed the division on the peninsula.

Most died without meeting or hearing from their relatives on the other side of the border across which all civilian exchanges are banned.

North Korea has long manipulated the reunion issue as a tool for extracting concessions from the South, and has rejected proposals to increase their frequency.