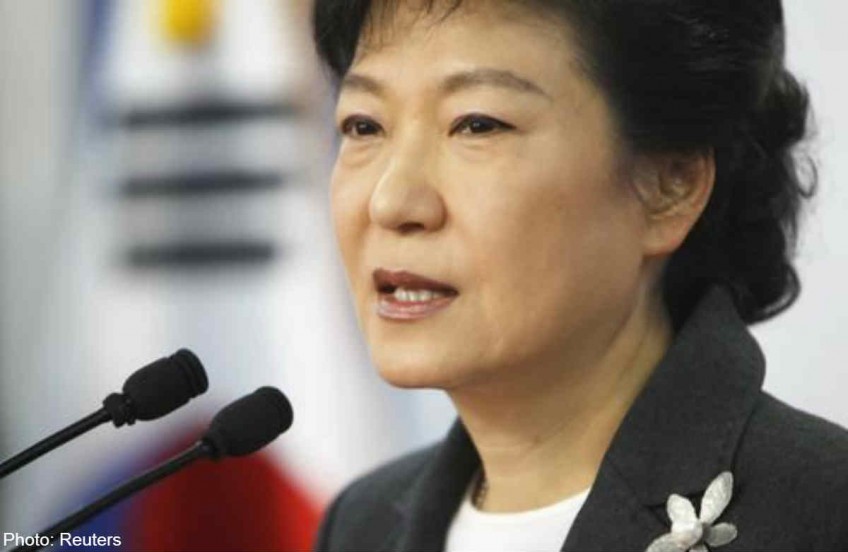 President Park Geun-hye requested political leaders' support for her reform drive and efforts to improve inter-Korean ties in a New Year meeting held at the presidential office on Friday.

"We face the historic task of overcoming the wounds of the 70 years of national division and open an era of unification on the Korean Peninsula," Park said at the meeting attended by the leaders of the two largest parties, the parliamentary standing committee chiefs, high-ranking officials and business representatives.

"The government will make utmost efforts to conduct substantive preparations so that unification will become a reality, not an ideology or a dream."

The president also urged leaders to join efforts to push ahead with her reform agendas aimed at eradicating corruption both in public and private sector, and at easing old regulations to revitalize the nation's economy.

"It would be good if the political arena supports businesspeople to work actively," Kim said. The comment was taken as a hint about his recent statement regarding the need to release imprisoned businessmen on condition.

Kim also said that the party would serve as a bridge for the government to reach out to the opposition party and the National Assembly, in an apparent bid to dispel rumors of heightened tension between himself and the president, and the pro-Park Geun-hye faction.

Although Kim was considered pro-Park in the past, he has long since grown apart from her, and a faction led by Rep. Suh Chung-won has been speaking out against him in recent weeks.

At the faction's year-end lunch on Dec. 30, pro-Park lawmakers criticized Kim, accusing him of wielding too much power.

At the meeting, three-term lawmaker Rep. Yoo Ki-june claimed that Kim was leading the Saenuri Party down a path that was "neither ruling party nor opposition," while former party secretary general Rep. Yoon Sang-hyun accused Kim of failing to mend ties with Cheong Wa Dae.

"The Cheong Wa Dae-(ruling) party relations are more rickety than ever before and are fracturing, but the efforts to oil and strengthen (the relationship) are weak," Yoon said.

While Kim has denied friction with the presidential office and refuted the accusations that he has too much power, the pro-Park faction appears ready to take a larger role in party operations this year.

For the main opposition New Politics Alliance for Democracy, the meeting marked the beginning of a year riddled with uncertainties. The party is set to elect its new leader in February, who will be tasked with leading the party out of instability, and to put factionalism to rest.

Ahead of the meeting, the NPAD opened the year with criticism packaged as suggestions for the administration.

Citing survey results showing that only about half of the country approves of changes made during the first two years of the Park administration, NPAD spokesperson Rep. Park Wan-ju called on the government to make "real efforts" towards reunification of the two Koreas and more careful personnel decisions for the highest posts in the government.

The NPAD spokesperson also honed in on the changes in welfare and economic policies, calling on the president to keep the promises she made during her election campaign in 2012.