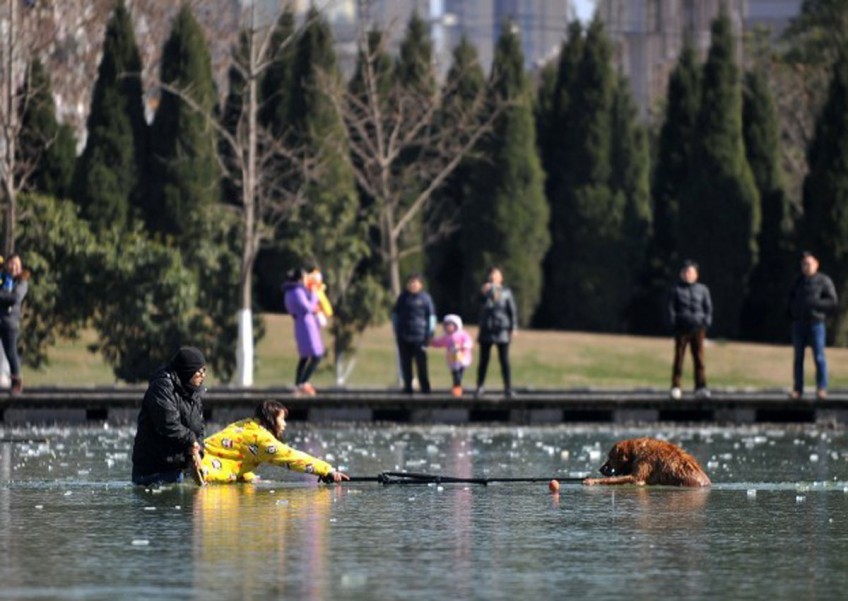 Mr Xiang told NetEase that the plucky Goldie was struggling desperately, but sank deeper into the icy waters with each attempt to struggle free. It was clear that the Goldie's energy was dissipating.
Weibo

Hell has frozen over in China, with many animals such as tortoises and goldfish frozen in water as temperatures dipped to record lows in large parts of the country.

As the cold battered people and animals alike, a heartwarming story has emerged from Anhui province's Hefei city where a golden retriever trapped in a frozen lake was saved by a Samaritan.

According to Chinese news website NetEase, Mr Xiang, a reporter, was working near an art museum on Monday (Jan 25) when he saw the golden retriever struggling in the frozen lake in front of the museum.

Without any regard for his own safety, Mr Xiang grabbed his camera tripod and waded through the icy waters towards the dog, which was struggling to cling onto a thin layer of ice that had begun to crack.

Mr Xiang told NetEase that the plucky dog was struggling desperately, but sank deeper into the icy waters with each attempt to struggle free. It was clear that the golden retriever's energy was dissipating.

The owner of the golden retriever, who was earlier standing helplessly by the lake frantically exhorting the dog to break free, later gathered the courage to enter the water to save her dog. However, she became worn out before she could reach it.

Luckily for her, Mr Xiang was not far behind. After hacking the icy surface of the lake for about 10 minutes, he managed to create a 30m-long path to pull the golden retriever back to the shore.

"I knew the water wasn't deep, and I knew how to swim," Mr Xiang explained.

According to China Daily, Guangzhou city welcomed its first snow in 67 years on Sunday afternoon, while Shanghai endured the lowest temperature in 35 years on the same day with a low of minus 7.2 degrees Celsius.

[[nid:259800]]
SUBSCRIBE TO OUR NEWSLETTER
Your daily good stuff - AsiaOne stories delivered straight to your inbox