The heir to the Samsung empire and the leaders of several other South Korean conglomerates will go to Pyongyang this week for an inter-Korean summit, Seoul announced Sunday.

Samsung's Lee Jae-yong and the heads of the SK and LG groups will be part of President Moon Jae-in's delegation as he heads for a meeting with the North's leader Kim Jong Un, Moon's office said.

Kim Yong-hwan, vice-chairman of Hyundai Motor Group -- whose founder was a refugee from the North -- will be among the entourage. Hyun Jeong-eun, chairwoman of the separate Hyundai Group which pioneered many cross-border economic projects, will also accompany Moon.

Hyun met Kim's father Kim Jong Il several times. She was among the first South Koreans to meet the young leader when he assumed power following his father's death in 2011.

Moon, a dove who favours dialogue with the North to nudge it toward denuclearisation, has advocated closer economic ties across the border, despite multiple sanctions on the North over its atomic weapons and ballistic missile programmes. 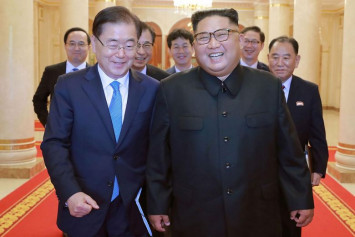 He is set to fly to the North's capital on Tuesday for a three-day summit with Kim -- his third meeting this year with the young ruler of the isolated country.

The delegation of about 200 includes top Seoul officials including its spy chief, foreign minister and defence chief as well as prominent figures in the economy, religion, culture and sports, Moon's office said.

Lee is the de facto leader of the Samsung group, by far the South's biggest conglomerate, which includes Samsung Electronics -- the world's largest maker of smartphones as well as memory chips.

Other delegates include Archbishop Hyginus Kim Hee-jung of the Catholic church, a female ice hockey player who led the joint inter-Korean team which competed in the South's 2018 Winter Olympics, and K-pop star Ailee.

"The upcoming summit will help pave the way for more vibrant cross-border exchanges," Moon's office said in a statement.

US efforts to persuade the nuclear-armed North to disarm have been stalled for months after Kim and US President Donald Trump vowed to denuclearize the peninsula at a landmark summit in June.

Moon, who was instrumental in brokering that meeting, is hoping to play the role of a mediator again this week. He is also expected to discuss several joint economic projects agreed during his first summit with Kim at the border truce village of Panmunjom in April.

One of those agreements came to fruition on Friday when the two Koreas opened a joint liaison office in the North's city of Kaesong, which once hosted a joint industrial estate shuttered in 2016 by Moon's conservative predecessor.